It was September 2007 when Chrysta Bilton first learned she had some step-siblings she didn’t know about.

Bilton was 23, a recent graduate of Barnard College, and had just moved home to live with her mother, Debra, in Los Angeles. She’d barely unpacked when her mother sat her down with her younger sister Kaitlyn. “I found out that your father was secretly a sperm donor,” Debra explained. “You have a few biological brothers and sisters spread out across the United States.”

“The way my mother had said ‘a few’ made it sound like there could be a whole lot more,” Bilton writes in her new memoir, “Normal Family: On Truth, Love, and How I Met My 35 Siblings” (Little, Brown), out now. “A dozen? Two dozen? More than that? And what did they look like? How old were they?”

“There’s more,” Debra added, looking directly at Bilton. “I think your boyfriend might be your brother.”

Bilton had only recently started dating Max, who she’d met at a party in LA. His twin sisters, according to a family friend and founder of the Donor Sibling Registry, were fathered by the same man who donated sperm to Debra. It didn’t mean that Max shared a dad with Bilton, but it was too close for comfort.

As for how many other siblings they might have, Debra’s best guess was “anywhere between three dozen and a few hundred,” writes Bilton.

It had all started a few years earlier, with a 2005 New York Times story about “Donor 150,” a prolific participant at California Cryobank, one of the nation’s first sperm banks. His name, it would eventually come out, was Jeffrey Harrison, a handsome, athletic musician and on again/off again homeless man who earned $400 a month over eight years donating his seed.

Although he wasn’t named in the Times story, Harrison was enthused by the attention. “I am now the most famous anonymous sperm donor in the world!” he said aloud while reading the news, according to Bilton.

Harrison decided to come forward as Donor 150, partly because he thought he could financially benefit from the publicity. His sperm donation days were a distant memory, and he was now making a meager living in LA cracking tourists’ backs for $10. There was just one problem: Bilton’s mom. Most of Harrison’s donations were anonymous. His donation to Debra was not.

“She had absolutely no idea that Jeffrey had ever donated sperm to anyone other than her,” the author writes. “She was in the process of saving up to buy Jeffrey a motor home so he wouldn’t have to live in his car. He was certain that his motor home would no longer be on the table if he went public.”

Harrison wasn’t far off. When Debra learned that more of his children were coming forward, forming a Facebook group to connect with each other, her first course of action was to threaten Harrison. 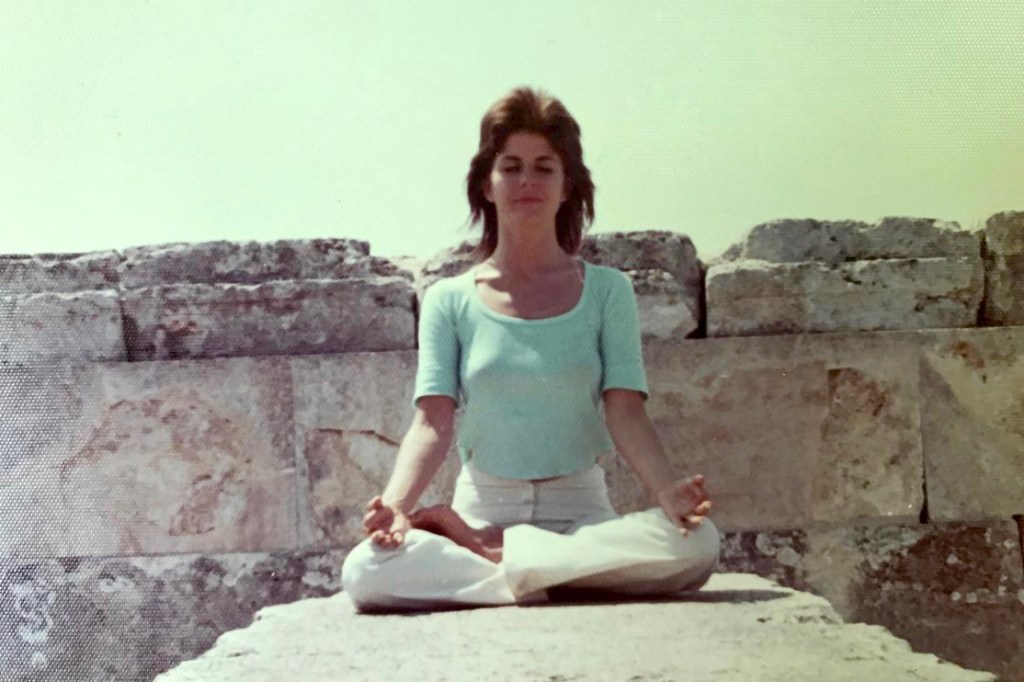 Debra meditating in Egypt in the 1970s.  Image: Courtesy of Chrysta Bilton

“If you ever mention my name or my kids’ names, even once, in an interview or to any of your degenerate sperm children,” she yelled at him over the phone, “I’ll send my friend Al, who is in the Mafia, to pay your dogs a visit.” (Harrison lived with four dogs, who he considered family.)

Debra also tried kidnapping him and forcing him to elope. “Get in the car,” she once commanded. “We’re going to the courthouse and getting married!” Her theory, Bilton writes, is that if Donor 150 was officially their father, even if they found out about the rest of the siblings, Bilton and her sister would “still feel special.”

Debra had an unconventional life even before having children with a popular sperm donor.

Born and raised in Beverly Hills, she was openly gay and, according to Bilton, “a hedonist, yearning to overdose on everything, especially life.”

She was good friends with Warren Beatty, and during the ‘70s, the pair purportedly picked up new lovers together. The actor would often introduce his friend by saying, “I’d never met anyone who loved women as much as I do until I met Debra.” 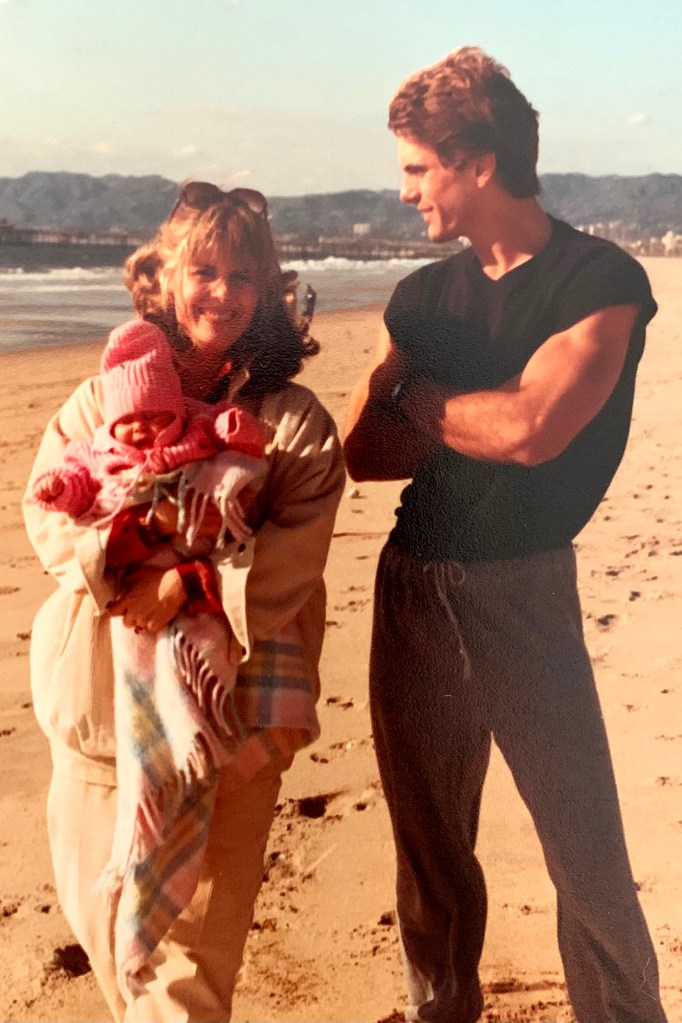 Author Chrysta Bilton as a baby with mom Debra in 1985, and dad Jeffrey Harrison, a k a “Donor 150.”
Image: Courtesy of Chrysta Bilton

She also allegedly inspired Mick Jagger during a “platonic” week with the Rolling Stones frontman at the Bel-Air Hotel during the ‘60s, when she declined his invitation to sleep with him by saying, with a sly grin, “You can’t always get what you want, but you get what you need.”

When Debra decided to become a mother — and Beatty “politely declined” her request for his sperm — she ended up paying $2,000 to a handsome stranger she ran into at a Beverly Hills hair salon in 1983. Harrison seemed perfect, even though much of his family history was fabricated. (He didn’t, as he claimed, have relatives who ran the Federal Reserve Bank of New York or were Supreme Court justices.)

Her only request of him? “I want you to swear on your soul,” Debra told him, “that you will never do this for anyone else but me.”

He agreed, but his vow didn’t last for long. His “donations” — he made several to Debra, in case his first few didn’t get the job done — were made at a new fertility clinic called the California Cryobank in Century City. When he learned that the “genetic perfection” of his sperm — the doctors’ words — could yield a regular paycheck, he began returning two to three times per week for almost a decade, using the money to pay for gas, weed, and rent.

His DNA looked impressive, but Harrison had eccentric personality quirks that weren’t included in the donor binder. He would bottle-feed sick raccoons he’d found on the street. He’d refer to himself as the “soul caller,” claiming he’d go into deep meditations when donating because each sperm already had consciousness. He had wild theories that “the government planned to set off three nukes across the country, at which time the aliens would be coming to harvest our eggs,” Bilton writes. He once purchased a wig as a disguise to evade the CIA and FBI, and had plots to escape to India.

Debra didn’t want him as a permanent fixture in her daughters’ lives, but she did want him present. A dozen times a year, when Bilton and her sister were growing up, their mother would pick up Harrison, give him a shower, and have him “appear on the stage of our lives,” Bilton writes.

“My father never lived with us, but I just assumed that was the way families were. You had a full-time mommy… and ‘Daddy’ came around every few weeks when he was missed too much.”

When the Times story broke — and Harrison unveiled himself as the true “Donor 150” — Debra became enraged. When she visited Harrison at his motor home and found a TV producer there, claiming that he was making a documentary about “all of his children,” Debra screamed, “Those are not his children!”

Several of those children formed a Donor 150 Facebook group, and one of them reached out to Bilton, asking if she’d want to join their unconventional family. (“While my father had respected my mother’s legal demands not to mention our family in any of his media interviews,” Bilton writes, “he had told all his new children about us.”)

Both Bilton and her sister Kaitlyn were unnerved by the strangers claiming to be siblings and made a pact. “We will never talk to, look at, or think about these people again,” they agreed.

In May of 2015, Bilton — married and nine months pregnant with her first child — was contacted by a woman named Jennifer, claiming to be one of Harrison’s many daughters. But something felt different about this one. On the handful of interactions she had with Jennifer, “she was more identical to me in spirit than anyone I had ever met,” Bilton writes.

She decided to host a “reunion” at her home in Los Angeles, inviting all of her 26 step-sisters — all of Harrison’s children (that they knew of) were girls — to meet in person and get to know each other. Harrison wasn’t invited — Bilton cut off contact with him years ago, furious at the lies, and her mom and sister decided to stay away.

“Just because we share biology with them doesn’t make them our family,” Kaitlyn told her.

Debra stayed away from the gathering at first. But by day two, she showed up at the house with “all the family memorabilia I had carefully archived from Jeffrey’s side of the family,” she told the group. “All the birth certificates, and pictures of your grandmothers and great-grandmothers, and all the historic books on the family. Whoever is interested can meet me in the guesthouse in the back in ten minutes for a presentation.”

Bilton had no idea what changed her mother’s mind, but she watched as her new siblings passed the photos back and forth, admiring photos of the father they’d never met, and “tried my best to suppress the tears,” she writes.

“I looked at my mom standing there proudly as she glanced around the room, clearly feeling like the matriarch of this big, sweet, unconventional family,” Bilton writes. “I realized that without her, none of these people would be alive, at least in the iteration in which they currently existed.”

Some made plans to track down Harrison in California, but most were happy with the reunion alone. “For them,” Bilton writes, “connecting with the siblings was enough.”

A version of this article originally appeared here on nypost.com

Is There Anything Can I Do To Orgasm During Sex?

How Long Should Sex Be? Why Longer Doesn’t Equal Better