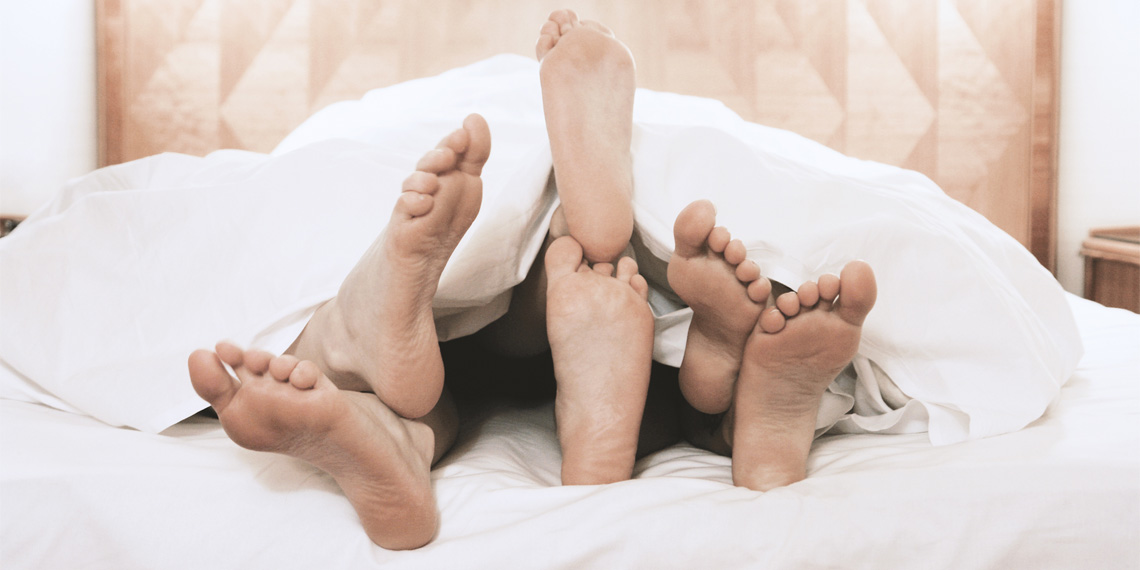 Threesomes appear to be gaining in popularity, and a study published in Archives of Sexual Behavior suggests that these arrangements are generally positive experiences for participants.

The findings suggest that threesomes are particularly enjoyable for men (versus women) and for couples in committed relationships (versus casual partners).

As social norms evolve, sexual attitudes are becoming more relaxed in Western cultures and taboo behaviors are slowly becoming more accepted. Among these behaviors, are group sex arrangements. For example, mixed-sex threesomes (MSTs) seem to be rising in popularity. These arrangements involve sexual activity between three people at the same time and include participants of more than one sex.

Study author Ashley E. Thompson and her team note that surprisingly little is known about the outcomes of threesomes. Do participants tend to enjoy or regret these experiences?

“My primary research program is designed to investigate ‘all things monogamy,’ primarily monogamy negotiations, violations, and alternatives,” explained Thompson, an associate professor at the University of Minnesota Duluth and director of the Sexuality and Relationship Science Lab.

“My previous work on this topic has revealed that threesomes may be an ideal way for folks to explore their sexual identity as well as alternatives to traditional monogamy in a stigma-reduced environment (as compared to other consensually nonmonogamous behaviors; i.e., swinging).

In fact, previous work by Dr. Ryan Scoats reveals that couples who engage in threesomes perceive their participation as a means by which to not only to maintain monogamy but to enhance it. Thus, I am interested in exploring additional benefits associated with threesomes.”

The researchers conducted a study to explore the outcomes of MSTs and to examine variables that might affect these outcomes. They recruited a final sample of 276 heterosexual adults (217 males, 59 females) who reported at least one MST experience. Of these participants, 29.6% were married, 23.6% were single, 18.1% were in an open or polyamorous relationship, 14.9% were in a monogamous relationship, 7.2% were dating, and 6.8% chose “other” for relationship status.

The results suggested that respondents had overall positive experiences with mixed-sex threesomes. As far as expectations, the average score was 3.74 on a 5-point scale, suggesting that the experience “slightly exceeded expectations.” Additionally, most participants said they would be willing to repeat the experience, and 87.7% indicated that they had achieved orgasm.

People who engaged in an MST experience with a romantic partner also reported a stronger desire to repeat the experience than did those participating without a romantic partner. The authors of the study propose a few explanations for this. Sexual activity between committed partners tends to involve better communication and a higher level of comfort than activity with casual partners.

Additionally, there may be an element of bonding and thrill that occurs among couples that engage in MST experiences together. Finally, threesomes that include a committed partner might be less likely to violate social norms and less likely to elicit stress and guilt.

“Overall, the results of my study reveal that people report fairly positive outcomes resulting from their most recent MST,” Thompson told PsyPost. “In fact, the majority of participants indicated that they experienced an orgasm in their most recent MST, that they would participate in the same MST again if provided the opportunity, and that the MST met (or even exceeded) expectations. Thus, MSTs may be a wonderful opportunity for adults to explore nonmonogamy and same-sex sexual behavior.”

The study authors acknowledged that their recruitment methods meant that people with positive MST experiences may have been more likely to join the study. This means that the results might overrepresent the positive outcomes associated with MSTs. Furthermore, the sample consisted of cisgender, heterosexual adults, and future research will be needed to extend the findings to other sexualities and gender identities.

No, Quiet Quitting a Relationship Isn't Smart—Here's Why | Well+Good

What ‘Happiness’ Really Means To Your Life, Work, And Wellbeing

25 Funny and Relatable Memes About Marriage.

Dating App Trips Up Another Capitol Riot Suspect, One Accused of Hitting Police With Whip

Want To Have A Better Romantic Relationship? 4 Experts Tell You How

What Makes A Good Dating App?