Thirty-one years ago, R. Kelly, a budding R&B artist from Chicago in his mid-20s, was signed to his first major record label. Around the same time, he began having sex with a 15-year-old girl, according to her subsequent lawsuit.

The accusations mounted over the decades. They grew increasingly heinous. They spilled into public view. Still, the singer who became a superstar leaned on his fame to mask the predator under the persona — and to shield himself from consequences.

On Wednesday, Mr. Kelly, 55, could no longer escape the fallout: He was sentenced to 30 years in prison for racketeering and sex trafficking. As the judge read out his term, he did not react, and outside, his victims expressed deep relief at the decision.

The sentencing that followed a September conviction culminated Mr. Kelly’s staggering downfall, from a chart-topping hitmaker known as the king of R&B to a pariah whose musical legacy has become inextricable from his abuses. His trial exposed harrowing and systematic torment directed by the musician and enabled by those in his orbit.

U.S. District Judge Ann M. Donnelly, who presided over the federal trial in Brooklyn, said in court that “few crimes more serious” than Mr. Kelly’s exist, and that he had manipulated girls and women. “You taught them that love is enslavement and violence,” the judge said, recalling the scenarios he created to wreak primal humiliation on them.

“This case is not about sex. It’s about violence and cruelty and control,” Judge Donnelly said. “You had a system in place that lured young people into your orbit — and then you took over their lives.”

Mr. Kelly’s lawyer, Jennifer Bonjean, said outside the courthouse that she would appeal the sentence. She had sought 10 years. Mr. Kelly was prepared for prison, she said, but “has regrets and is sad.”

Mr. Kelly was among the most successful American musicians of the 1990s and 2000s, as chart-topping hits like “I Believe I Can Fly” and “Ignition (Remix)” catapulted him to some of the world’s largest stages.

But as the entertainer, whose full name is Robert Sylvester Kelly, crafted an image as a sex symbol, he exploited access to young fans and aspiring musicians to fulfill his desires, the government said.

For an hour in court on Wednesday, seven women and one of their fathers delivered wrenching accounts, describing the devastation of their sense of self-worth, and how the trauma continues to touch every facet of their lives.

One woman, known in court only by the pseudonym Jane Doe No. 2, said she had sex with the entertainer in 1999 when she was 17, and said she still often finds herself “sobbing uncontrollably at random times of the day.”

“I was a teenager. And you were a pedophile, ready to ruin another young lady’s life” the woman said. “You made me do things that broke me. I literally wished that I could die because of how you made me feel.”

She had first encountered Mr. Kelly with hopes of helping a friend land an audition, she said, but the singer coerced her into sex. The courtroom grew tense at one point as Mr. Kelly and his lawyer whispered at their table.

“I’m sorry I don’t want to interrupt his conversation,” she interrupted, pausing until the room returned to silence.

“I don’t know if I’ll ever be whole,” the woman continued. “What you did has left a permanent stain on my life that I will never be able to wash away. I’m sure you never think about that.”

After the women told their stories, Mr. Kelly declined to speak. He still faces an Aug. 15 trial in Chicago on federal charges for producing child pornography and luring minors into sex acts, which his lawyer said prompted the decision.

The facade that federal prosecutors said long protected the singer began to crumble in the late 2010s, after years of inaction despite whispers about his abuse throughout the music industry.

The explosion of the #MeToo movement had coincided with a protest campaign against his music, a troubling Lifetime documentary on his treatment of women and the new accusations of accusers and their families. This time, the scrutiny was too much to evade.

On Wednesday, the women in court said that the moment was a long-awaited catharsis.

“We reclaim our names from beneath the shadow of your inflicted trauma,” said a woman who spoke in court under a pseudonym, but identified herself to reporters as Jovante outside the court. “We are no longer the preyed-upon individuals we once were. We will be able to live again.”

The woman who identified herself as Jovante, center, one of the accusers who spoke at the sentencing hearing in Brooklyn. Image…Stephanie Keith for The New York Times

Ms. Bonjean argued in court that the government’s portrayal of Mr. Kelly as a “one-dimensional” predator and “evil monster” was misguided, and that he endured childhood challenges — including his own sexual abuse.

Starting around age 6, she said, the singer was molested, sometimes on a “weekly basis.” Ms. Bonjean said it was not an excuse, but a consideration.

Indeed, the judge considered copious trial evidence in her decision. The government called 45 witnesses, including 11 victims who painstakingly recounted Mr. Kelly’s brutality. Jurors were also confronted with hours of jarring audio and video recordings, including one in which, at the singer’s behest, a woman sullied herself with her own waste.

Other accounts were similarly disquieting. One of two men who testified that they were sexually abused by Mr. Kelly recalled a moment when he was at the singer’s home gym in Illinois. Mr. Kelly snapped his fingers twice, he said, and a “young lady” crawled out from under a boxing ring to perform sex acts on them.

“I will never forget that,” Judge Donnelly said of the story. She added that she was baffled by the hundreds of enablers who surrounded the singer. “I don’t know why all these people turned a blind eye,” said the judge, who also ordered Mr. Kelly to pay a $100,000 fine.

The case, like other high-profile #MeToo era prosecutions, illustrated how powerful people in a fame-besotted age can skirt consequences, even as accusations of sexual misconduct persist for decades. Many people were familiar with similar allegations about the Hollywood producer Harvey Weinstein and Bill Cosby, the comedian. 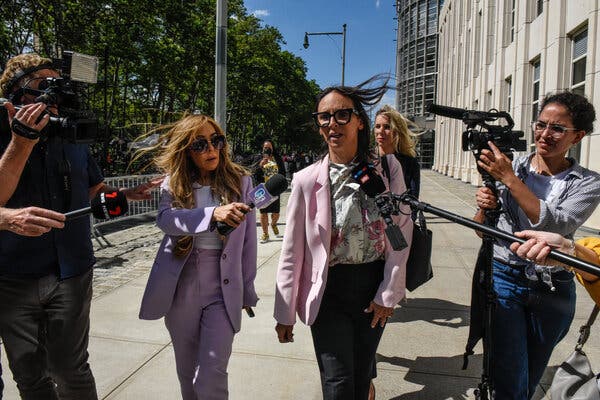 Mr. Kelly’s lawyer, Jennifer Bonjean, argued in court that the government’s portrayal of Mr. Kelly as a “one-dimensional” predator and “evil monster” was misguided. She said she would appeal. Image…Stephanie Keith for The New York Times

The race of Mr. Kelly’s accusers also may have been consequential: Black women have historically been more likely than white women to have abuse accusations distrusted or dismissed.

“There wasn’t a day in my life, up until this moment, that I actually believed that the judicial system would come through for Black and brown girls,” Jovante said outside the courthouse. “I stand here, very proud.”

For Mr. Kelly, questions about his encounters with women burst into the public after Vibe magazine reported on his illegal marriage in 1994 to the R&B star Aaliyah, when she was 15 and he was 27. Six years later, The Chicago Sun-Times published an investigation into accusations that the singer was having sex with underage girls.

Through it all, Mr. Kelly’s stardom remained intact, even during a criminal trial in 2008, that centered on an infamous 27-minute tape that appeared to show him having sex with an underage girl. (He was acquitted on all counts after the girl declined to testify at trial.)

The singer performed at the opening ceremony of the 2002 Winter Olympics on the same day Chicago police revealed they were investigating him. Hours after the singer pleaded not guilty to the charges that led to his 2008 trial, he sang alongside children at a church in Chicago.

Through the mid-2010s, he headlined major music festivals while collaborating with stars, from Lady Gaga and Justin Bieber, to Jennifer Hudson and Chance the Rapper.

“I do want to ask you, Mr. Kelly, to look at me, and just think what I might be feeling. Put yourself in my shoes,” Charles pleaded as he turned to face him. “We’re suffering because so many people love you. They hate us.”

Charles told the singer he did not harbor ill will toward him, and encouraged him to seek forgiveness from God.

“But for him to forgive you, you have to admit what you’ve done,” Charles said. “So it’s up to you.”

The singer’s gaze remained fixed on the table in front of him, and never met the man’s eyes.

A version of this article originally appeared here on nytimes.com

Why Do We Keep Asking the Wrong Questions About Sexual Assaults?