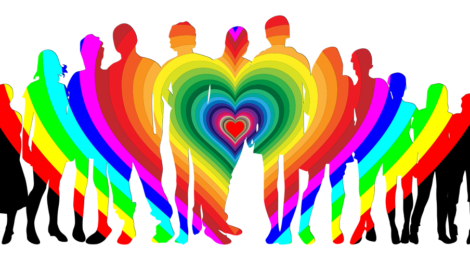 This post is by Robert T. Muller and Lucas Norton, a contributing writer at The Trauma and Mental Health Report.

~ June, 2021 ~ One evening, while out for drinks at a bar in downtown Toronto, a friend of mine, Jason (name changed for anonymity), a resident and actor in the city, was speaking with a colleague when the topic of his polyamorous relationship came up. It was a difficult conversation, and Jason left feeling hurt, belittled, and personally attacked. He explains:

“It was incredibly condescending… there’s often this sense from people that my polyamorous relationships aren’t as valid, committed, or real as a monogamous ones are.”

Polyamory is a form of consensual non-monogamy (CNM), an umbrella term describing a variety of relationship styles in which partners are free to have sexual or romantic experiences with more than one partner.

These relationships are more common than one might assume. In the U.S., about 4 to 5 percent of people report being in a CNM relationship, while about 20 percent have been in such a relationship at some point in their lives. According to Muise: “Interest in CNM is also growing, based on a study of the frequency of Google searches for CNM related terms.”

Research shows that these relationships aren’t any less psychologically healthy or happy than traditional monogamous ones, and may even have some additional benefits. Muise explains:

“The levels of satisfaction and commitment in CNM relationships are similar to those in monogamous ones, while people in CNM ones tend to report more trust and less jealousy on average. As well, people might have more of their needs met and experience greater sexual fulfillment.”

On a personal level, Jason feels there are benefits for him and his partners, saying:

“Consensual non-monogamy is a way for my partners and I to truly figure out what we want from each other and build our relationships on what works for us based on our own needs, rather than on a conditioned model of what those relationships are ‘supposed’ to look like.”

Although people in CNM relationships may experience benefits, they also face some challenges, the most serious of which is stigma. Like Jason, many in CNM relationships experience negative reactions from friends, family, and co-workers if they reveal the truth about their love lives. Rhonda Balzarini, a researcher studying stigma and CNM at York University, explained:

“Anywhere between 26 to 43 percent of individuals who practice CNM report experiences of stigma and discrimination. This could be related to the unquestioned assumption of monogamy’s normalcy and naturalness.”

Balzarini’s research has also shown that: “It is possible that some of the stigma stems from beliefs about CNM relationships being sexually risky.”

Jason agrees, but feels that some of the stigma stems from other sources:

“People seem threatened by polyamory. It’s a threat to their relationship because monogamy is kind of fragile. I think communication in monogamous relationships surrounding jealousy and attraction to other people is often painful and difficult because you rarely talk about whether your partner is attracted to anyone else. Poly relationship models are open about those attractions, and not afraid of them.”

However, there are difficulties inherent to polyamorous relationships as well. Jason claims that the biggest issue for him is time management:

“If you have one important relationship and X amount of hours, that time goes to that one person and some friends. If you have three partners, something’s got to give. Resources that people often think are limited, like love and energy, really aren’t! But time is finite.”

“Some of the ways we can begin to address stigma is by engaging in CNM affirming practices. These include being generally knowledgeable about CNM, providing affirming recognition of people’s relationship choices, providing education when relevant, talking about CNM as a viable relationship arrangement, and ensuring that counselors and therapists have training on helpful practices for people in CNM relationships.”

Jason has a more direct response to his experiences of stigma:

“Regardless of how you feel about someone’s relationship model, if they tell you who they are and you denigrate them, you’re being a jerk. If someone tells you they like what they’re doing, and they’re not hurting anyone, just give them a listen.”

Joy and Pain: Bride Dies At Wedding Altar, Groom Marries Her Sister Instead

Perspective | as Menopause Hit, My Libido Waned, My Brain Felt Dull. So I Gave Testosterone a Try.