Spectrum News NY1 fired Erick Adame after someone took nude pictures of him performing on an adult webcam site and sent them to his employer and his mother. 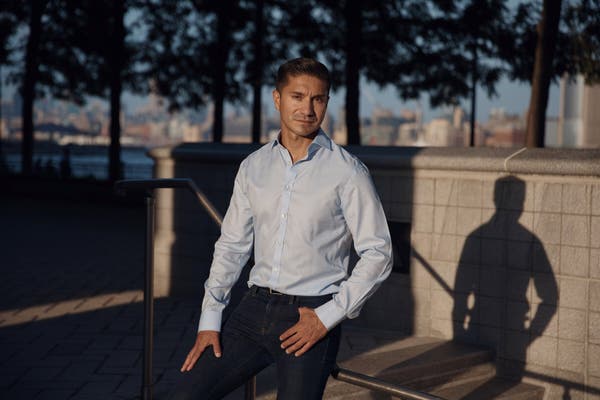 Erick Adame was fired from his job as a popular meteorologist after someone began sending nude pictures of him to his employer.  Image: Andres Kudacki for The New York Times

The pictures first emerged on a internet message board at the end of last year, taken surreptitiously while Erick Adame, a well-known New York City meteorologist, was performing sex acts nude on an adult webcam site.

Mr. Adame was mortified. He said he had stopped the performances — which he had come to view as a compulsive need for risky sexual behavior — a month before.

But then, this spring, an unknown sender delivered emails and packages containing more nude pictures of Mr. Adame, 39, to Spectrum NY1, the television station where he did the morning weather report. Then the pictures arrived at his mother’s house.

Last week, after the latest round of pictures arrived, NY1 fired Mr. Adame.

The person who sent the pictures appeared to be determined to shame or harm Mr. Adame. But in the wake of his firing, which he made public in a post on Instagram, a wave of support for him emerged online. Celebrities and politicians, including the actress and former candidate for New York governor, Cynthia Nixon, Assemblywoman Yuh-Line Niou and Councilman Erik Bottcher, rushed to Mr. Adame’s defense.

Now, Mr. Adame finds himself at the center of a debate over whether employers should be policing their workers’ legal off-the-clock activities online — particularly at a time when many people’s sex lives are increasingly led on the internet, and as Americans have become more open-minded about sex in general.

But Mr. Adame’s case is also complicated by other factors, including his role as a television personality, an unusually public facing position. Broadcast companies usually require on-air employees to sign contracts that contain morals clauses, which give them the power to fire employees for a wide range of behavior, from arrests to offensive Tweets, that might harm the corporation’s public image.

Patricia Sánchez Abril, a professor of business law at the University of Miami, said Mr. Adame’s case was far from clear cut. She said his termination underscored what a “blurry time” we live in, when the internet has broadened the reach of normal people’s speech.

“This is not clearly a win for any one side at all,” she said. “There is a potential mental health element, there is a victimization element, and there’s the fact that there are things done in private and things done in public and he just misjudged the line between the two.”

She added: “There is a real question if as a public figure, in a position of trust, do you have a responsibility to keep certain things unseen?”

Two Spectrum employees familiar with the discussions that led to Mr. Adame’s firing said the decision had been complicated, and that the company worked with him for several months to avoid this outcome. Neither person disputed Mr. Adame’s timeline of events.

When asked what had changed between March and September to justify his firing, they referred a reporter to social media sites where images of Mr. Adame’s performances were circulating. In some of them, Mr. Adame apparently references his employer, but Mr. Adame declined to address the specific content of the performances or the images taken without his knowledge.

Mr. Adame said he believed the protracted, monthslong nature of the photo leaks led Spectrum to a breaking point.

In an interview, Mr. Adame did not defend his webcam use — he said he spent years in therapy, in part for compulsive sexual behavior — but he also said he thought there was a “generation gap” in attitudes toward online sex.

Mr. Adame used webcam sites where users can perform on public or private channels and watch each other, identifying themselves only by screen names. He thought he had some control over who was watching him, but he did not.

The trouble began for Mr. Adame last December, when someone took screenshots of him during one of those sessions. The photos appeared on the message boards of LPSG, a website that allows users to post nude pictures of other people without their knowledge or consent.

Mr. Adame asked Spectrum to give him the email address it received his pictures from, but he said they have not yet done so. A lawyer for the parent company of LPSG, Lawrence G. Walters, said the company would comply with the subpoena sent by Mr. Adame “if and when it is approved by the court.”

Mr. Walters said his client, which is based in Europe, had “assisted Mr. Adame on several occasions with his requests to remove user-posted gossip about the incident and links to the content.”

Mr. Adame said he told his employer the pictures were taken without his consent, that he was in treatment for his compulsive behavior, and that he stopped using webcam sites in December 2021. Spectrum accepted his explanation, he said, but told him it might be forced to take action if new pictures emerged or if he continued to use webcam sites.

“I think a lot of us have things — for some people, they turn to food or whatever thing they do that is somewhat compulsive or they think they do too much of,” Mr. Adame said. “For me it was going on a webcam.”

The sender did not send messages or demands to Mr. Adame, and he did not know who the person was. The messages to his employer were signed, “a concerned citizen,” and the package to his mother came with a note that said, “I want you to know what your son is doing.”

The goal seemed to be to embarrass or harm him.

In June, his employer told him it had received more pictures. These pictures were different than the ones they were sent in March, and Spectrum wondered if he had been using webcam sites again.

Mr. Adame told them he had put his compulsive webcam use behind him and that the pictures were old, he said. But when the third batch arrived in September, Mr. Adame was fired.

In the days after, a new thread dedicated to him was created on the LPSG message board. But this time, messages by people who expressed sympathy for Mr. Adame outnumbered those by users asking to be sent his leaked pictures.

“Please be respectful of Erick,” the forum’s moderator wrote. “The only person who deserves to suffer is the horrible human that did this to Erick.”

A version of this article originally appeared here on nytimes.com

Georgia Lawmaker Comes Out as Nonmonogamous: 'I'm in Love With Two Wonderful People'

Protected: Kanye West Says God Will Bring He and Kim Kardashian … Amid Her New Relationship With Pete Davidson