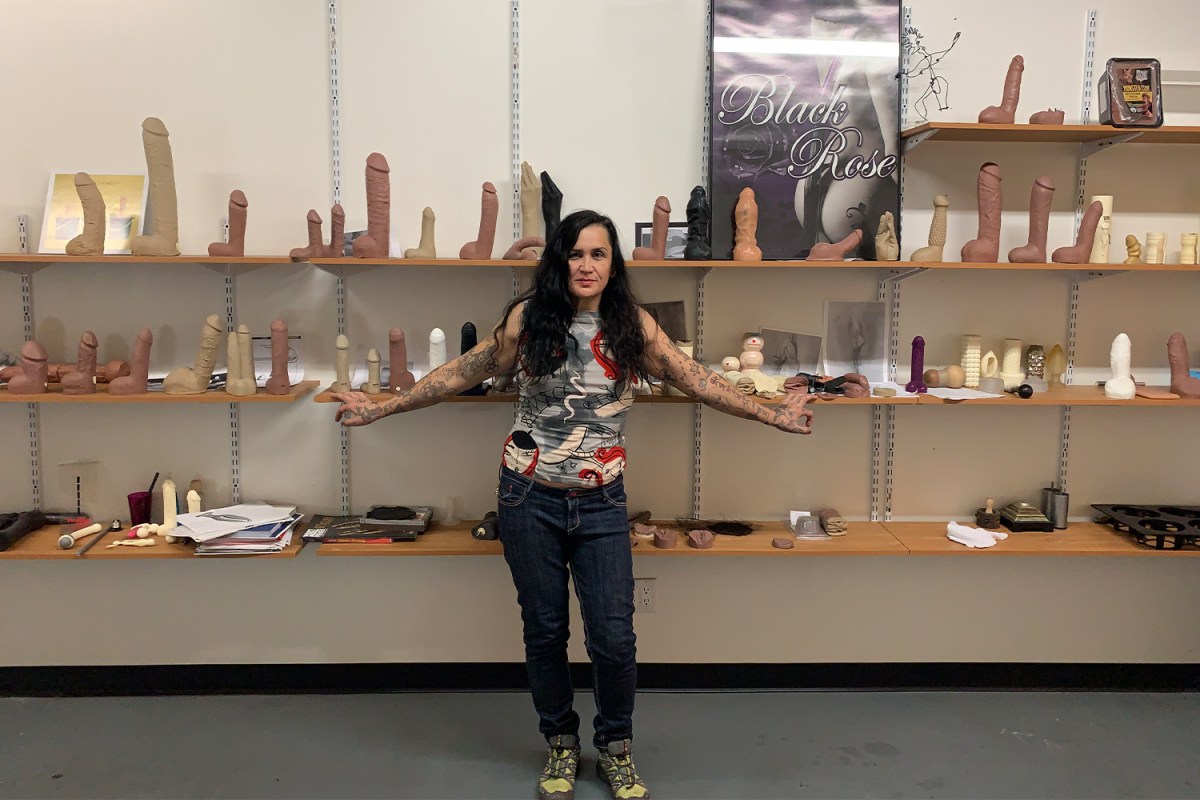 Obviously, sex toys are made by people, but the job “dick artist” just doesn’t seem real.

Siddhartha didn’t realize there was such a thing as a dick artist before she became one — and she never intended to wind up in Southern California. Growing up in Colombia, she was taken with French art and thought she would end up in Europe. But she got a student visa to the U.S. in the late ’80s and figured, “Why not?” One year of studying turned into two years, three years, four years…and suddenly, she was getting her green card and citizenship, so she wound up staying. (Don’t worry, she made it to France later to check out the museums.)

In the early ’90s, Siddhartha was part of the gallery scene in Los Angeles. This was during the heyday of the Los Feliz Onyx Cafe; according to a 1987 article in the LA Times, the Onyx Cafe was “hung with art that changes every eight weeks or so and frequented by well-known Los Angeles artists such as Peter Shire, Gary Panter and Cam Slocum.” “It was very famous because a lot of bohemian artists used to gather there,” Siddhartha says.

Her friend from the Onyx Cafe — a famous Filipino painter and sculptor — was leaving his job, and referred her to take over. She didn’t know what he did for work at the time, but when she showed up the next day, she quickly discovered he was in adult toy design.

Siddhartha “knew about toys and stuff,” but she’d never actually seen any up close. “So I went inside, and I saw all the toys, and I was like, ‘Oh, this is interesting,’” she says. To her, it was just artwork — making a penis, a vagina or even butt plugs was still art — so she felt right at home. “You do the veins, you do the texture, you do the shape of the head, the shape of the shaft, everything; I was making it as realistic as I could,” Siddhartha explains.

And she was good at it! Siddhartha kept getting poached by industry competitors (with her former employers’ blessings) before landing at Doc Johnson.

Sex toys: from under the covers to mainstream

Siddhartha’s now been at Doc Johnson for 26 years, long enough to see the public perception of the sex toy industry go from perverted pariahs to fully embraced by the mainstream.

“For the first 10 years, I never told anybody what I did for work because I was ashamed,” says Siddhartha. She considers herself a sensual person; even to her, though, talking about sex — much less working in a sex-related industry — was stigmatized.

So she wasn’t forthcoming to family and friends when they asked what she did for work. She would keep it vague and say, “I’m an artist” or “I’m a designer,” without offering details. Siddhartha would also try to hide when the media was on-site for interviews. Even within the industry, she felt designers weren’t respected as much when she first started.

“But then when things started becoming a little bit more mainstream,” she explains, it became more natural to talk about. Eventually, her job became a source of pride — and welcome press attention. In 2017, a photo of Siddhartha at work was featured in a New York Times article about Doc Johnson.

“Now things have changed that designers are seen as very important for the company, and there are even famous designers now doing adult product design, and it’s more mainstream,” Siddhartha says. “But I think, in that time, it wasn’t taken too seriously.”

I reached out to Chad Braverman, COO and Director of Product Development for Doc Johnson, to ask him about Siddhartha and her role at the company. “Siddhartha is an incredible part of the team,” he responded. “She is able to create gorgeous realistic and non-anatomical designs, and she draws inspiration from everywhere. It’s always fun to walk through her office and see the shapes that have influenced her work. She’s been with Doc for so many years and is responsible for many of our top sellers.”

Siddhartha likes knowing that people use her creations for pleasure. “How many people in the world have been happy using something that I designed…that I made?” she muses.

The destigmatization of the sex toy industry isn’t the only thing that’s changed over the years.

When Siddhartha first started, the internet was still in its infancy, so it was harder to research and interact with the communities Doc Johnson was trying to reach with their products.

“In the beginning, it was so simple,” she says. “The process would start with ‘Well, I’m going to make a 10-inch penis [or] I’m going to make a seven-inch, thick penis with a big head,’ but for the most part, they were just guessing what people would actually want to use.”

These days, Siddhartha is a click away from all kinds of research and inspiration. She can see what competitors are doing. She can also go to online forums and chat with people “and really go into the minds of the market we [are] trying to reach,” she explains.

The open access of today’s internet has been a boon for innovation because having all that information at her fingertips helps Siddhartha improve existing products or identify a gap in the market and create something entirely new.

Technology has helped streamline the process. Thanks to digital design tools on her computer, Siddhartha was able to work from home quite a bit during the pandemic. She still works with molds, but a 3-D printer allows her to make quick changes and alter mockups faster than ever before.

If the design team at Doc Johnson likes one of her prototypes, they’ll send it overseas to mock up with soft materials. Unfortunately, some of her favorite designs don’t make it to market because they’re too expensive to produce and thus, the profit margins don’t make sense from a business perspective.

Given Siddhartha’s expertise and open, enthusiastic approach to the job, it might be surprising to learn that she doesn’t typically use sex toys herself. Sure, she’s done some experimenting — but, to her, nothing compares to just plain old skin-to-skin. That’s why she’s become obsessed with Brazilian jiu-jitsu because of the “touching, squeezing,” and that impossible-to-replicate “person-to-person touch.”

What Really Drives Anti-Abortion Beliefs? Research Suggests It's a Matter of Sexual Strategies

A Person’s Motivations for Cheating Predict the Type of Affair They Will Have, Study Finds

Can Sex Be Funny?

This Is the Age Women Stop Putting Up With Bad Sex