Jerry: Well, at least you probably had some, uh, pretty good makeup sex after.

George: I didn’t have any sex.

George: I didn’t have makeup sex.

Jerry: In your situation, the only sex you’re going to have better than makeup sex is if you’re sent to prison and you have a conjugal visit.

“Makeup sex,” or sex that takes place after a conflict, has long been rhapsodized in media depictions of relationship conflict and socio-sexual scripts. Makeup sex has been portrayed as a fun way to shed frustration or anger and a path to repair the health of a relationship following a disagreement. It has been credited with lowering stress, building emotional bonds, diffusing tense situations, resolving conflict, restoring difficult situations to a sense of normalcy, and reassuring one’s partner that the commitment is still strong despite differences. Plus, makeup sex is presented in the media as being hot.

But does the reality of makeup sex live up to its reputation for couples? A recent study looked into the issue using data obtained from newly married couples. 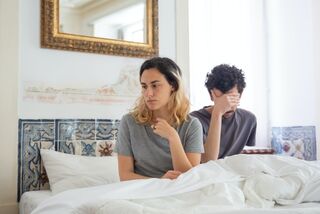 Maxwell and Meltzer (2020) had several questions surrounding the topic of makeup sex that they noted contains several cultural myths. First, they wondered whether sex is more likely to occur on days when relationship conflict exists, versus days when conflict was not experienced. Second, is sex that co-occurs with conflict more or less satisfying than during periods of no conflict? Third, does sex buffer the negative impact of conflict on relationship outcomes?

To find answers to these questions, 107 newlywed couples were recruited to participate in the completion of a dyadic daily diary. The 214 individual participants provided 2,539 days of data. Each day, the diarists were asked to (1) indicate whether their partner did something they found disagreeable (conflict was operationalized by the researchers as “one partner doing something the other did not like”), (2) indicate whether they had sex that day, (3) report the level of satisfaction with the sexual encounter, if the answer to having sex was “yes,” (4) rate how satisfied they were with their sex life each day, regardless if they had sex or not, and (5) rate how satisfied they were with their partner and marriage each day. Marital and sexual satisfaction were assessed with a six-month follow-up. Results from the compendium of 2,539 diary records, in the initial four months of marriage, included 494 days of conflict and 864 days of sex with 140 days of sex and conflict co-occurrence.

The researchers’ findings contradicted the idea that intimate partners considered makeup sex to be satisfying. Couples reported finding less satisfaction in sex that occurred on days of conflict. Although, sex was found to prevent a reduction in relationship satisfaction on conflict days. Furthermore, while conflict was not associated with sex on a given day, sex was found to have an unlikely occurrence on the day following a conflict event. So, while makeup sex may, in the short-term, buffer against marital dissatisfaction following conflict, the sex itself was reported to be less satisfying.

In a study by Wade, Mogilski, and Shoenberg (2017), participants indicated, in a survey, tactics for successful conflict resolution in a relationship. Study one consisted of participants nominating reconciliation behaviors. Study two involved participants rating each nominated behavior on its effectiveness in conflict resolution if it were used as a tactic by their partner. Men in the study were found to put more emphasis on sexual values, while the women participating invested more in emotional resources.

Men had higher favorability than women in using sexual acts (makeup sex) as a resolution tactic. Women preferred an apology (as a display of altruism) from their partner and an emotion response, such as crying. Overall, in the study, acts demonstrating emotional commitment were found to be most effective in relationship conflict resolution.

Perhaps for some people, makeup sex isn’t all it’s advertised to be. I think more particulars about makeup sex need to be explored, both in research and within relationships. Is the bond of the relationship relying on makeup sex? Does the relationship support and reinforce conflict when makeup sex is viewed as a reward? Is the couple using makeup sex to avoid addressing the underlying issues in the relationship? If makeup sex is being used to temporarily bandage the wounds of a relationship, there will eventually be rough waters ahead for the couple—and it may be harder in the future to grasp and know how to solve issues if the standard short-term solution had been sex.

What’s necessary to understand is that makeup sex may need to be preceded by an actual makeup. Address the issues—come to a resolution—then have sex. Perhaps this formula is also the formula for makeup sex to be more satisfying.

A version of this article originally appeared on psychologytoday.com

As QAnon Strains Relationships, Loved Ones Try to Show a Way Out

The Four Dating Trends Predicted for 2022 – YOU Magazine