As a relationship coach, Sarrah Rose knows all about the dirty and dishonest tricks people use to deceive the people they’re dating.

So the divorced mom of two, who connected with a man on a dating app who seemingly hit all the right notes, was skeptical when he showed more interest in her bank account than in meeting her — and within weeks, demanded she fork over $50,000 in cryptocurrency.

“When I first saw Ren, he was very attractive, tall, fit, and really educated and successful,” Rose, who’s based in New York City, told Insider. “Or so I thought.”

In his profile for “The League,” an app that bills itself as a “dating community for the overly ambitious,” “Ren K.” said he was a 43-year-old, 6-foot-tall, Ivy League-educated native of China pursuing a Ph.D. in Columbia University’s prestigious Industrial Engineering and Operations Research program.

In a series of screenshots seen by Insider, Ren boasted that he ran an asset management business and served as a “partner emeritus of Goldman Sachs” and recollected his days at yet another elite school, Yale.

“My goal is very simple: make a lot of money to satisfy my future hobbies and give my future family a better life,” the person who said his name was Ren Jiawei wrote to Rose on day one, trying to establish himself as financially stable and family-oriented.

“Here’s a guy who wants a family and who has a lot of money — it’s every girl’s dream. On paper, what’s not to like?” said Rose, who added that Ren quickly moved the conversation to WhatsApp. “He said, ‘This app moves too slow for me,'” she recalled, adding that he deployed red heart emojis, talked about his hidden tattoos, and flirted liberally.

But in a matter of hours that first day, Ren switched gears, unceremoniously steering the conversation from romance to finance, explaining that one of his hobbies was trading cryptocurrency, a virtual currency considered controversial for its market vicissitudes.

It was the start of Rose’s path down a common romance cryptocurrency scam. 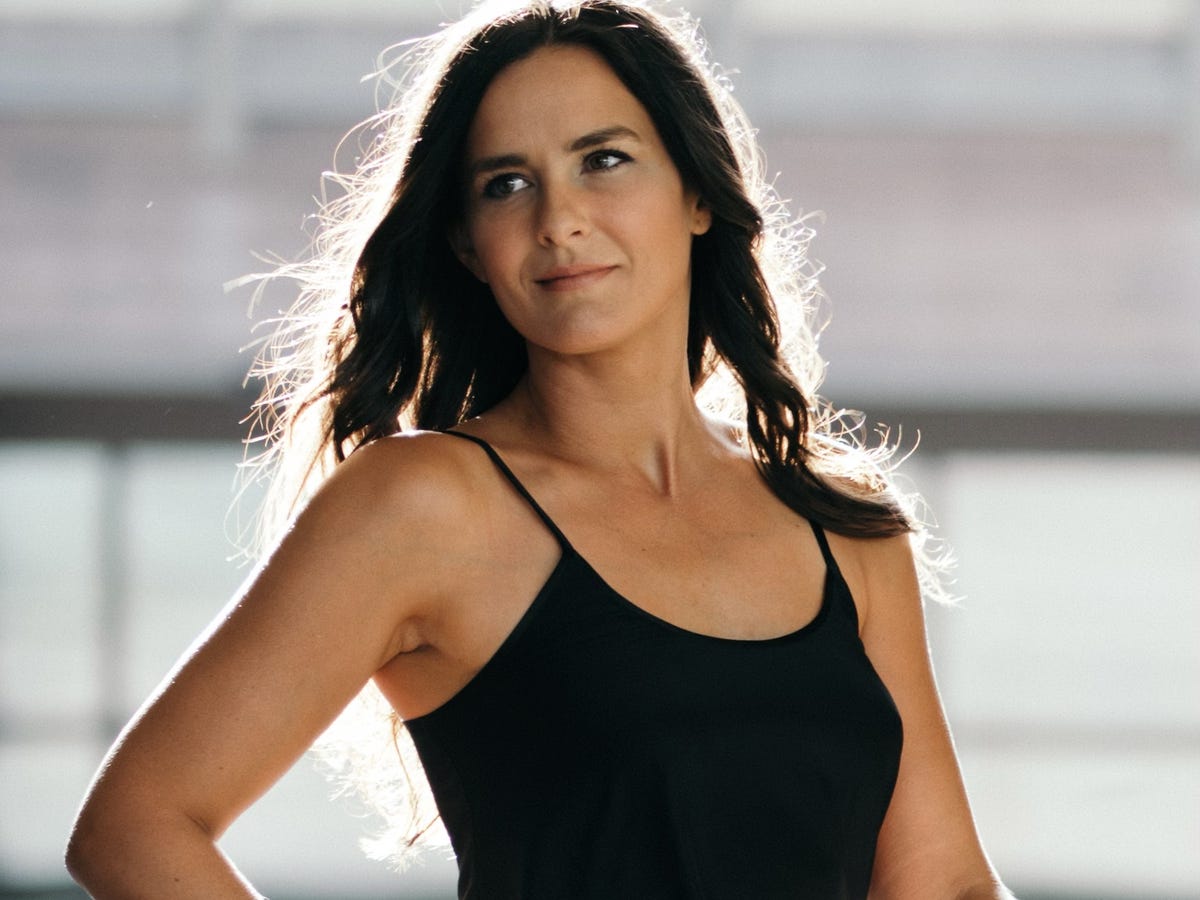 Rose said the scammer initially tried to woo her with flirting and heart emojis, but quickly moved on to pressuring her to invest in crypto. Image: courtesy of Sarrah Rose.

Pushing crypto as a way to ‘get closer to one another’

Almost immediately, Ren asked Rose about installing the crypto-trading app Coinbase onto her phone so he could advise her on making trades.

“He was having me move my money into an unregulated wallet that I wouldn’t be able to get back,” said Rose, who was wise to the scam early on. “He tried to convince me that it was connected to Coinbase — considered a safe and established platform — so I would be fine. I didn’t believe him.”

While he still kept up the pretense of romance, Rose smelled a serious rat: his dating profile suddenly disappeared. While he fessed up to canceling The League, Ren artfully tried to spin it. “I’m lucky to have met you,” he told a dubious Rose, who said she always screenshots the profiles of men immediately after connecting.

“I’m not trusting, and I want to have that proof,” she told Insider.

In fact, not only had his dating profile disappeared but his LinkedIn profile — which The League purportedly uses to verify the identity of its members — was also gone. 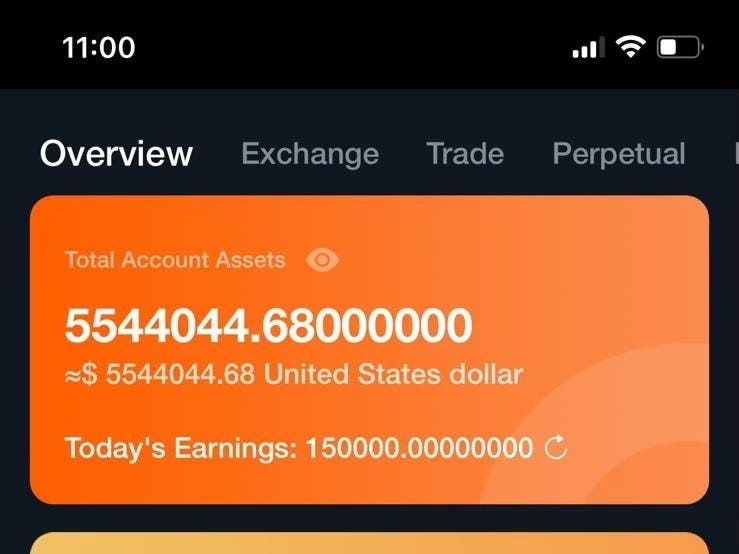 Early on in their “courtship,” Ren sent Rose a screenshot of his alleged cryptocurrency account. Image: C/O Sarrah Rose

“I date wealthy men, and this isn’t how they behave, like sending a screenshot on day two about their trading. Yes, men love to brag, but this didn’t feel legitimate,” Rose recalled.

The self-styled financial whiz told Rose he was planning to make a trade and invited her to join him as a “way to get closer to one another.”

“You can try doing cryptocurrencies. That way we might also have a common interest by doing something together,” he wrote in a text seen by Insider. “It’s a way for me to show my self-worth. If you trust me, I’ll be happy,” he added, while walking her through a transfer of funds to her Coinbase account. 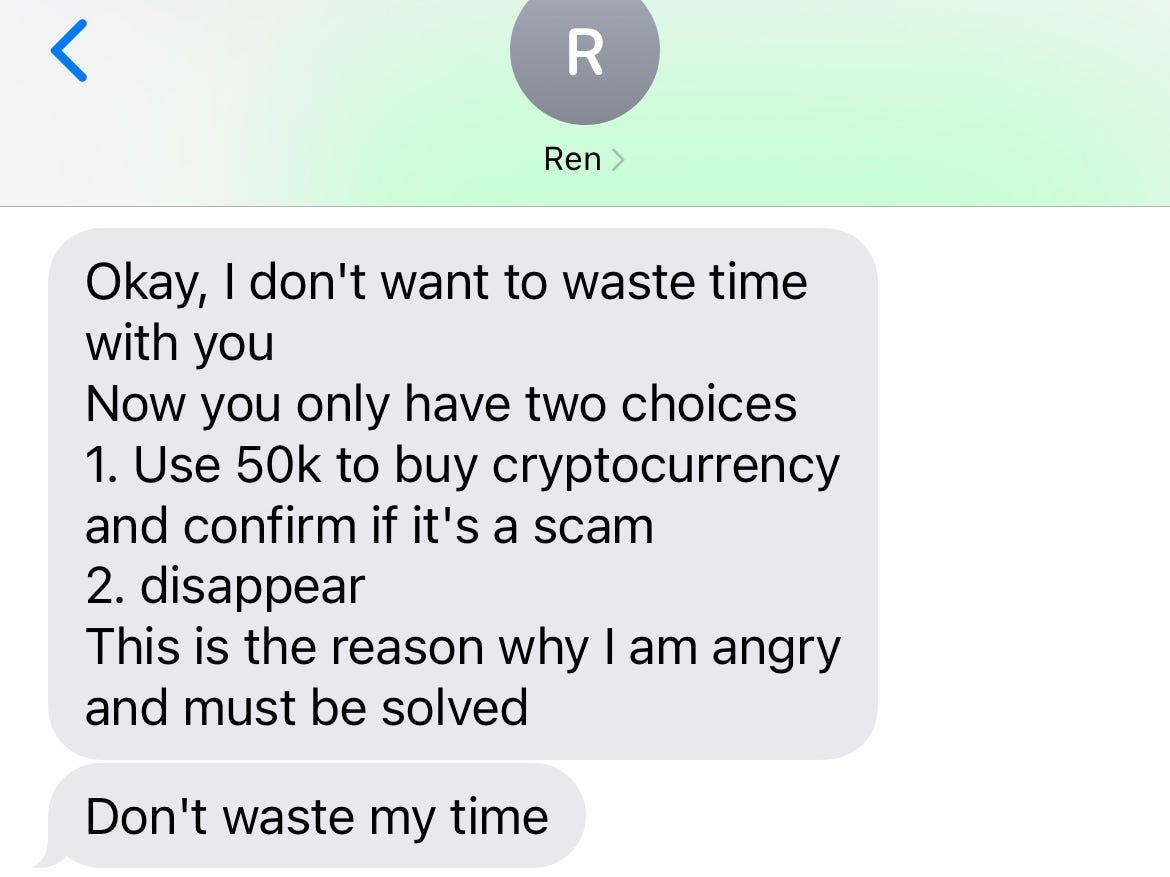 Rose shared screenshots of her communication with Ren in which he tried to coerce her into forking over cash. Image: c/o Sarrah Rose

Now, acknowledging what she called the “pink flags,” Rose was playing along to see how he operated. “Let’s see what this game is all about,” she told Insider, adding that, per Ren’s instructions, she moved funds from Coinbase Pro to Coinbase Wallet, with her overeager would-be beau guiding every step of the trade from bitcoin to ethereum.

Because the crypto market was tanking, he said it was a “very good opportunity” to invest.

Eventually, the $3,000 Rose said she would invest didn’t cut it with Ren. He wrote, “If you are worried, you can use about $10k first to learn and familiarize yourself with the whole process, after that you will understand if it is suitable for you.”

When Rose confronted him about him “walking away” because she wouldn’t do a $10,000 wire transfer to a crypto wallet, Ren called her “pathetic” for “doubting” him. “I’m disappointed in you,” he wrote her.

After a couple of weeks, he threw down the gauntlet and presented her with two options: “Use 50k to buy cryptocurrency and confirm if it’s a scam” or “disappear.” He warned he was “on the edge of patience,” according to screenshots seen by Insider. 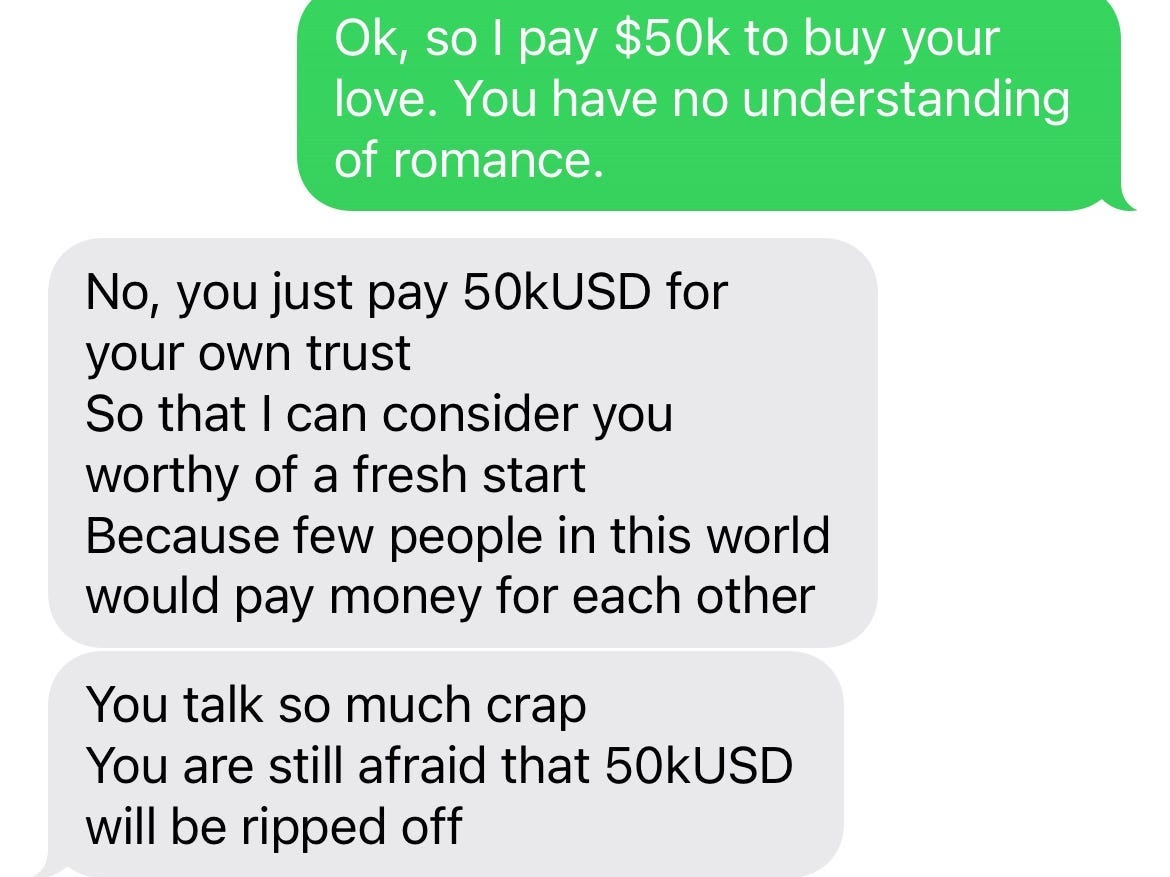 “He refused to meet me in person but wanted to act like a boyfriend and expected me to trust him as a girlfriend would,” said Rose.

Online romance scammers have taken to ‘pig butchering’ their victims

Rose is hardly the online dater to be targeted by a romance-oriented crypto scam. In February, a Tennessee woman revealed that she’d lost nearly $400,000 to a crypto scammer she met on the dating app Hinge. Like Rose, 24-year-old Nicole Hutchinson didn’t know much about crypto before she was approached on the platform about investing, and didn’t realize that the digital wallets she was being directed to put money into actually belonged to her dating scammer. She lost both her and her father’s life savings.

Divya Gadasalli, a 25-year-old woman living outside of Dallas, Texas, lost more than $8 million to a crypto romance scammer she met on Tinder last year. She told Bloomberg she felt confident she wasn’t being scammed because she was able to take money out of her crypto wallet — at first. But eventually, the scammer’s crypto platform made it more and more difficult to withdraw funds and she lost access to her money after several months.

The Federal Trade Commission says crypto romance scams have become so pervasive they even have a nickname — “pig butchering” — because “victims’ investment accounts are fattened up before draining, much a like a pig before slaughter.”

“The scammer’s initial contact is typically made via dating apps and other social media sites,” the FTC wrote in a 2021 report. “The scammer gains the confidence and trust of the victim, and then claims to have knowledge of cryptocurrency investment or trading opportunities that will result in substantial profits.”

“Crypto is perfect in every way for criminals — whether you’re using it as a lore to find investors looking for something or lonely people looking for something,” John Stark, a cybersecurity expert and former Chief of Office of Internet Enforcement at the US Securities and Exchange Commission, told Insider, adding, “The pseudo-anonymity and untraceability” make blockchain an ideal vehicle for scammers.

When he worked at the SEC, Stark recalled, “Whatever was big in terms of hype, fraudsters would immediately pounce on it and find a way to exploit it… You have the means through social media to connect with lonely, desperate people and to profile them to find your best target.”

As Jane Lee, a security architect with the fraud-prevention firm Sift, explained to Bloomberg, these scams are proliferating because “People are lonely, looking to dating apps, looking to meet and connect with people. And then the other side of the coin is cryptocurrency is such a hot topic right now.”

And the scams have gotten extremely sophisticated, often employing fake trading websites that perfectly mimic real crypto trading platforms. “It’s a website they have full control over and it mimics whatever the price of Bitcoin is at the time,” Lee said. “They are using real-time value so, if you were to cross-check just to verify, it looks real and so that’s the added twist to this particular scam.”

‘I don’t even think he’s a real person’

As Rose looks back on the experience, she acknowledges how pervasive these predatory scams can be.

“This strategy of trying to get money out of women is more common than people think. These scammers probably think women on dating apps can be vulnerable or desperate,” she said of women in their 30s and older. “It’s true — a lot of women are in that position.”

In his “About me” section on his The League profile, Ren wrote that he was “a two-faced person” who was “serious and disciplined” at work but a “casual person” in life.

Rose now believes there was no Ren. (Insider couldn’t find any Ren Jiawei among the 51 current students listed online in the Columbia IEOR Ph.D. program.)

“I don’t know if he’s even a real person,” she said. “I figured it was someone behind the scenes [overseas] in a call center where they scam a lot of people at once.”

The League didn’t respond to Insider’s requests for comment, but its website said it has a “zero-tolerance policy” when one “impersonates any other person, including falsely stating your name.”

“Women have a lot of conditioning to not trust themselves,” she said. “A big part of the work I do with women is to trust themselves — trust their feelings. If you feel like there’s a ‘pink flag,’ talk to someone about it.”

Are You Feeling Love Or Lust? How to Tell The Difference Between Them

Teaching young people about sex is too important to get wrong. Here are 5 videos that actually hit the mark

Lips is a new social network where sexual expression is welcome