~ NOVEMBER 2021 ~ This three-part post describes common misunderstandings about the effects of gray divorce on divorcing couples, their family members, and friend and support networks.

Part 1 explains how grief arises in gray divorce and how it can affect you. Part 2 describes prominent theories of grieving to help you understand the grief process. Part 3 focuses on tools and resources to help you work through the grieving process and heal.

Divorce is often compared to death. American novelist Pat Conroy wrote, “Divorce has many witnesses, many victims … Each divorce is the death of a small civilization.” American actor and novelist William Shatner said, “Divorce is probably as painful as death.” Author D.A. Wolf wondered why, even though heartbreak accompanies both widowhood and divorce, “we demonstrate more compassion when it comes to the former, though the ghosts of the latter still walk the planet.” Divorcing parents and their family members are the ghosts still walking the planet.

Divorce is the death of a marriage, the death of “couple-hood” and a family living together in one residence. Sadly, the death of extended family, friends, and community networks, gatherings, and traditions often occurs. The death of hopes, plans, and dreams for the future accompanies divorce. Divorce is the rock that drops into life’s lake, and the ripples of grief wash over everyone in the family’s circle.

The Merriam-Webster Dictionary defines grief as “a deep and poignant distress caused by, or as if by, bereavement” and defines bereavement as “the state or fact of being bereaved or deprived of something or someone.” We grieve when we are feeling the excruciating loss that overwhelms us in death’s wake. Grief is our response to this loss. 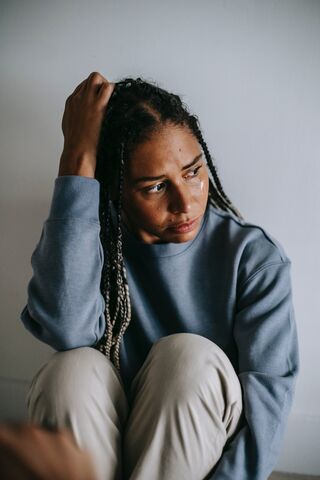 Tears are the silent language of grief. Source: Alex Green/Pexels

Pulitzer Prize-winning novelist Toni Morrison depicted grief as, “It was a fine cry—loud and long—but it had no bottom, and it had no top, just circles and circles of sorrow.” The French philosopher Voltaire said that tears are the silent language of grief.

Psychologist and university professor Joshua Ehrlich writes, “Divorcing grown-ups often have no idea how to bear grief; some do not even know they are grieving … We can think of the people, then, who approach therapists for help around divorce … as stuck or partially stuck around the tasks of mourning.” Ehrlich’s book is a helpful addition to the literature about divorce and loss, and he masterfully educates about the mourning process for parents and their children. Although he writes about parents and minor children, his words also apply to divorcing parents and their adult children.

When divorce occurs, often the last topic to be considered is grieving. And yet, every aspect of divorce involves loss and grieving, and it is often inconsolable loss and grieving for many. Our culture gives little acknowledgment to this. Grieving is the invisible travel companion on the journey called divorce—for the one who is leaving the marriage, for the one being left, for the children of the marriage, for their extended family members, and their friend and community networks, and support systems.

Grieving is inevitable. It is also invisible because most of those experiencing the divorce do not consider what they are experiencing as grieving, whether it is their divorce, their parents’ divorce, or the divorce of their extended family members, friends, or community members. Most often, the people divorce touches say they feel shocked, angry, sad, and powerless—the feelings that arise during grieving.

During separation and divorce, both members of the couple are also experiencing significant losses, although both are often unaware of grief, their invisible companion. For the parents, the losses may include the loss of their spouse, who may have been their best friend for decades; loss of their nuclear and extended family, friend and community relationships, and support systems; loss of dreams they had for their current stage of life, raising children together, weddings, births, celebrations, and family traditions; loss of the family home; and loss of financial security.

For the adult children, the losses can feel overwhelming: the loss of their identity, as they wonder whether their childhood and adolescence were based on a foundation of lies and whether the appearance their family showed to the world was a façade; the loss of the permanence of their intact nuclear family, extended family, friend, and community relationships and support; the loss of emotional and sometimes financial support; the loss of accustomed family togetherness that they have experienced for decades; the loss of their dreams about celebrations, family traditions, graduations, weddings, and births; and, the loss of the family home where their family activities, celebrations, and traditions occurred, creating lifelong memories. And there are often minor children of gray divorcing parents who are grieving some of these losses.

If they feel the pull to “choose sides,” support system members like extended family members—grandparents, aunts, uncles, cousins, friends, and community members—often grieve their lost relationship connections. They don’t know what to say to the adult children. What they do say can make adult children feel worse rather than better. It’s common for adult children to hear, “Well, look at the positive side. At least they waited until you were an adult. They didn’t divorce when you were 6 years old. You didn’t have to grow up going back and forth between your mom and dad’s houses. You’ll be fine. You have your own life now. It’s just a bump in the road.” Even health care and mental health professionals, unfamiliar with the complex dynamics of divorce, can say similar insensitive comments and invalidate adult and minor children’s feelings and experiences.

Everyone gray divorce touches deserves understanding and compassion when they are grieving. Remembering the words of neuroanatomist and author Jill Bolte Taylor reminds us to honor the feelings of others. She said, “Most of us think of ourselves as thinking creatures that feel, but we are actually feeling creatures that think.”

The Challenges of Dating While Living With Parents

Does Being Loud In Bed Make Sex Better?

Can Sex Be Funny?

How the Pandemic Fueled the Rise of ‘Intentional’ Dating

How Much Real Sex Is in ‘How to Build a Sex Room’ on Netflix?

19 Sex Toys for Couples to Make Sex Even More Awesome