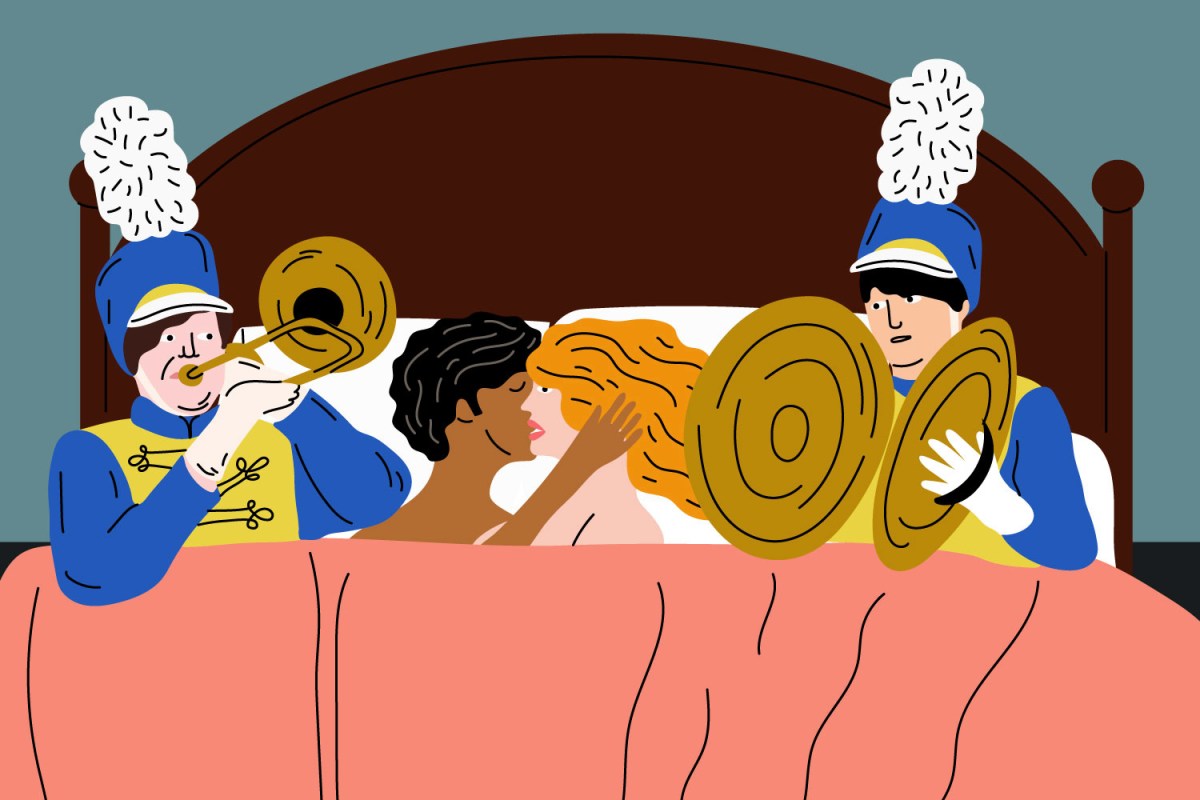 As you may have seen in the ~news~, supermodel and actor Cara Delevingne is proudly the latter, recently telling Sarah Hyland on the talk show Lady Parts that she prefers quiet sex. “When you just try and not make, like, any noise, you feel it way more, and it’s like, ‘Whoa!’” Delevingne said.

I’m all for everyone doing their thing and gettin’ it however they please, but Delevingne’s silence is golden take isn’t true for the vast majority of people. Sure, being quiet during sex can be very hot and intimate for people who are in a relationship (or know each other well sexually). I’m not here to yuck anyone else’s yum. But for people who need communication during sex in order for it be hot, sexy, and to know what they’re doing correctly (or incorrectly), making noise is kind of a must.

After all, if someone were completely silent during sex, wouldn’t you get in your head? Here’s what we know about sex and noise — and whether it actually makes sex better to be vocal. Let’s put some science behind the moans.

The brain is kind of designed to respond to (sexy) audio

As they say, the brain is the biggest sex organ, and that’s partly because our brains are wired for auditory processing. A big part of the human brain is devoted to the intake and comprehension of language. It takes a lot of mental power to process sounds.

During sexual arousal, there’s more in play than just the genitals. Sexual audio cues are taken in by the brain and interpreted. These are processed as a signal that we are turned on. This happens because the brain and body are connected by a massive web of signaling.

Research shows that common erogenous zones like the nipples, feet and neck are sexually responsive due to the gential cortex in the brain. Through a complex network of nerve endings, the brain and body send signals back and forth through the spine. A similar thing can happen when you hear sexual sounds: a signal is sent to the brain, letting it know you’re ready to begin the sexual arousal process. The brain registers these sounds as a response to stimulation, sending a corresponding signal to the genitals. Thus, sexual arousal can occur (or increase).

The difference? People having sex in real life make noises because sex is pleasurable — assuming you’re not faking, which certainly does happen.

We moan, sigh and groan because we want to communicate pleasure to our partner. “These sounds are a way to tell our partners what we like. Sex sounds may also enhance our sexual pleasure, both when we make them and when we hear them,” says Laurie Mintz, Ph.D., a licensed psychologist, certified sex therapist and author of Becoming Cliterate. Great sex is built on communication, and studies show that knowing that we’re pleasing our partners (and vice-versa) can have a positive impact on our sexual confidence and overall pleasure.

Of course, this isn’t true for everyone — some people enjoy that silent sex life — and that’s OK! People do vary, after all. We are all sexual snowflakes.

Still, scientists believe that there are physiological reasons why sex sounds are a turn-on. When we moan, scream etc., we hyperventilate,  leading to the arousal of the central nervous system, a key participant in sexual arousal. Just think about your raised heart rate and shallow breathing when you’re DTF.

And what about more purposeful communication? Saying things like: “Oh, yes!” “Right there!” “That feels amazing!” and “Don’t stop!” can also boost pleasure, because we’re literally telling our partner what works for us. “These help us direct our partner to give us pleasure and can make a partner more assured that you are telling them what you want,” Mintz says.

How to get your noise-making skills going

Here some some tips to get your dirty talk/sex noises going, in a way that is fun and natural.

If you’ve never had an orgasm before, it’s recommended that you start on your own so that you can learn what you like. The same is true for dirty talk. “Deepen your breathing and practice making sounds from your throat. You could even experiment by making exaggerated noises and see how that feels,” says Lucy Rowett, a certified sex coach and clinical sexologist.

It may feel silly at first, but if you can’t moan on your own, moaning with a partner there to hear you will likely continue to be daunting.

It can be “helpful to start with the kind of thing you know your partner finds hot already, like complimenting their favorite body part, describing fantasies you’ve had about them, and telling them how hot this encounter is making you,” says Sofiya Alexandra, co-host of the sexuality podcast, Private Parts Unknown.

Consider the things your partner enjoys during sex and make those audible. There’s nothing wrong with being direct. “You have every right to feel empowered to communicate your needs and the more you do, the more likely you will get what you want,” Mintz adds. “Communication is the bedrock to making your bed rock.”

We’re all here trying to figure sex out. And we’re all a little nervous about our sex sounds. (Well, most of us, anyway.) “If it ‘goes wrong,’ then you and your partner could laugh about it, or talk about it afterwards,” Rowett suggests.

Life’s too short to worry about your sex noises. If someone is rude to you about the sounds you make, that’s on them. Sex is an awkward, bizarre, embarassing, hot thing. And we could all do with being a little gentler on ourselves.

In conclusion: This isn’t a library! (Unless of course you actually happen to be getting it on in a library, in which case, maybe keep it down.) Make some noise!

Gray Divorce Can Cause Shock, Then Grief

Why Do We Keep Asking the Wrong Questions About Sexual Assaults?

What Is A Throuple Relationship And How Does One Work?

25 Marriage Tips From Couples Who’ve Been Together 25+ Years