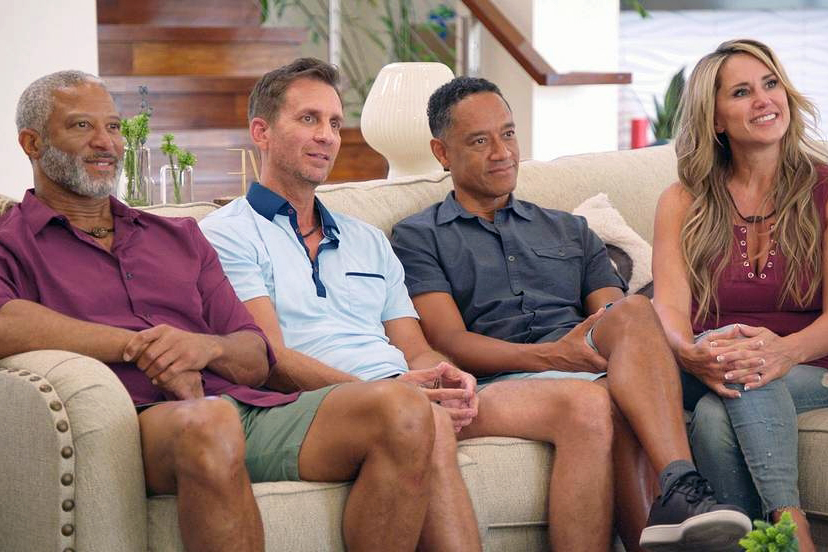 Anyone who watches reality dating shows knows there’s always some kind of added element to get viewers hooked.

In the long-running ABC “Bachelor” franchise, it simply involves the handing out of a rose, and the drama and suspense that surrounds who will get the final one.

In Netflix’s “Love Is Blind,” it’s a bit wilder: Contestants are not able to see each other while they fall in love in “pods” and then meet after a proposal to see if they can make it work before a wedding (yes, all in one season).

Now, with HBO Max’s “My Mom, Your Dad” there’s something built into the premise that is designed to make viewers both cringe and smile: Single parents, nominated by their children, are put together in a house to try to find love — all while their kids watch and pull strings in a house nearby.

The show, which debuted on HBO Max last week, was created by Greg Daniels, of “The Office” and “Parks and Recreation” fame, and Haley Daniels, one of his daughters. ITV Entertainment (the company behind “Love Island”) produced the show, with Sam Dean, who created “Love Is Blind,” serving as its showrunner.

The most exciting part, Dean said, was “working with comedy legend Greg Daniels and the creatively brilliant Haley Daniels, who are experts in comedy and created an amazingly open space to really delve into the nuance of real life that we wanted to focus on with our cast and situations we placed them in.”

“Taking their vision and making it come alive on screen was really exciting and tonally very different from what I’m used to,” Dean told NBC News in an email. “I feel we focused very heavily on the ‘little’ moments that are relatable to all and impact all of our lives in a significant way.”

For Dean, the show was also a welcome shift from the shows she usually develops.

“My experience has led me to produce many romantic dating shows involving people in their 20s & 30s, with a more singular focus,” Dean said, adding that “My Mom, Your Dad” was “a positive experience where I could explore broader aspects of love and in a cross-generational family dynamic. Something that all of us have experience with and can relate to.”

It almost felt like “shooting two shows in one,” she said, making it both exciting and challenging.

“Everything we filmed with the parents really depended on the kids’ contribution and genuine thoughts, motives and reactions,” Dean said.

But to have any reality TV show be a success, especially one involving romance, you need a great host. Enter Yvonne Orji.

You’re going to get more awkwardness than salaciousness.”

-Yvonne Orji, host of “My Mom, your dad’

The “Insecure” star said she is not a huge fan of reality TV. But she is a fan of love.

“I love heart and humor, and when they get a chance to intersect I’m like ‘sign me up,'” Orji said in a recent phone interview. “I love love, and I just want to see people happy. It’s just my nature.”

She also gravitated toward the authenticity of this type of dating show.

“You’re going to get more awkwardness than salaciousness,” she said. “These parents are too grown to be in situations where they don’t know better. These people have careers. They have kids. They aren’t going to be put in any situation that’s going to be really crazy. Which I appreciate.”

Also, “there’s so many things that are uphill battles for these parents,” she said. “It’s beautiful and cringeworthy a little bit to see them in this element.”

A version of this artticle originally appeared here on nbcnews.com

What Makes People Feel Conflicted In Their Relationships? New Research Has An Answer

No Grandchild? Six Years After Son’s Wedding, These Parents Are Suing

“It’s Over” – People Are Sharing The Moment They Fell Out Of Love With Their Significant Others, And It’s Heartbreaking