For the average man, penis size and shape may not be a completely comfortable topic.

But does size really matter? What is considered an ideal penis, and which qualities lead to a fulfilling sexual experience? How many men feel penis shame, and does it affect their confidence, mental health, or sexual performance? What is the most significant source of embarrassment? Can judging penis size be considered a form of body shaming? Depending on who you ask, this topic may be considered humorous – or very serious.

To learn more about the concept of penis shame, we surveyed 1,003 individuals, including both hetero and non-hetero men. We also asked women about their personal experiences and penis preferences. Keep reading to find out what we uncovered.

In the first section of our study, we explored the notorious claim that the motion of the ocean is more important than the size of the boat. We also asked straight, gay, and bisexual men, as well as women that are currently in a relationship with a man, to rank qualities they believed to be important in attracting a potential partner and keeping them satisfied.

Almost half of our respondents (48%) believed that penis size was important during sexual intercourse, while 71% reported that size mattered for their own pleasure. However, 61% said that sexual performance was the most important factor for a fulfilling sexual experience. As with most things, opinions varied by age and gender.

Gen Zers (85%), millennials, and women (both 74%) were most likely to say that penis size mattered for their own sexual enjoyment. More than half of Gen Zers thought that penis size was more important than sexual performance when it came to having a satisfying sexual experience, compared to 29% of millennials, 13% of Gen Xers, and 14% of baby boomers. Conversely, 75% of both baby boomers and Gen Xers found that sexual performance mattered most for a fulfilling sexual experience, compared to more than half of millennials and 43% of Gen Zers. Thus, the size of the boat does matter – but having the experience required to navigate the sea is just as important. 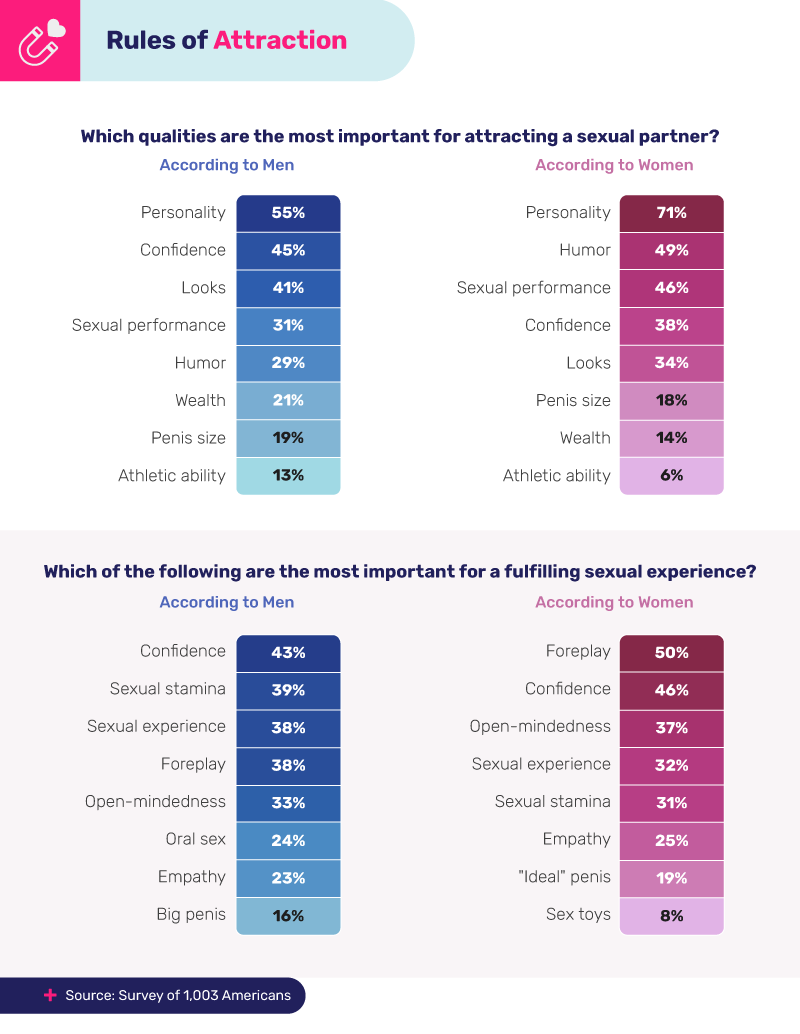 Besides penis size and sexual performance, our respondents claimed there are other things that can help attract a potential sexual partner or contribute toward a fulfilling sexual experience. Suggestions varied based on gender.

When asked about the qualities they perceive to be most important in attracting a partner, men ranked personality (55%), confidence (45%), and looks (41%) highest. When asking women the same question, they ranked personality (71%), humor (49%), and sexual performance (46%) as their top three.

According to our results, women placed less emphasis than men on physical appearance but more on sexual performance and humor. Men placed a higher value than women on wealth and athleticism when it comes to attracting a sexual partner.

Respondents were also asked to rank the most important qualities or skills for having a fulfilling sexual experience with a partner. Men ranked confidence (43%), sexual stamina (39%), sexual experience (38%), and foreplay (38%) above everything else. Women ranked foreplay (50%) as most important, which makes sense, since the process of fully readying female genitalia for pleasurable penetrative sex can take up to four hours – therefore making foreplay essential for women in terms of sexual enjoyment. Additional top qualities for female satisfaction included confidence (46%), open-mindedness (37%), and sexual experience (32%). Interestingly, an “ideal” penis is more important than a big penis for women.

How common is it to experience penis shame, and what factors contribute toward these feelings of insecurity?

More than half of our male respondents (61%) did not admit to experiencing penis shame. But for those that did, 39% reported feeling it for the first time at around 17 years old. This coincides with the average age an American male loses his virginity. Men who had felt penis shame (57%) were less confident in their sexual abilities than those that had not (73%). Penis shame percentages increased with the age of our respondents. Baby boomers (45%) and Gen Xers (45%) were more likely to have experienced penis shame, compared to millennials (37%) and Gen Zers (34%). This may be due to increased body positivity in younger generations or due to the fact that erectile dysfunction is a more common problem for older men, possibly due to decreasing testosterone levels.

What features make up the “ideal” penis, and how do these opinions differ by age and gender? 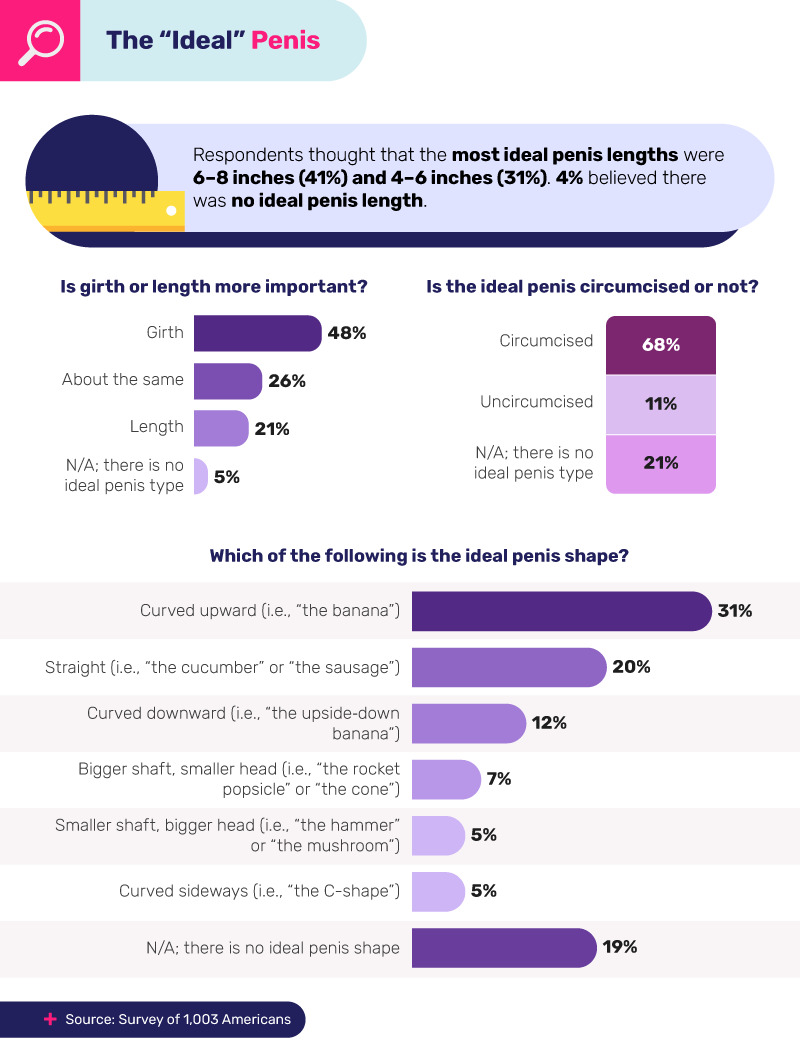 The average length of an erect penis is 5.16 inches, while the average flaccid one measures 3.61 inches. When respondents were asked about penis length, 41% agreed that 6 to 8 inches was ideal, while 31% preferred 4 to 6 inches. However, both male (48%) and female respondents (50%) almost equally agreed that girth is more important than length.

Preferences in penis shape also differed, although members that curve upward like a banana were ranked as the most popular (31%). Straight penises came in second with 20% of the vote, although many respondents agreed there isn’t an ideal penis shape (19%). Gen Zers and millennials preferred banana-shaped penises, while Gen Xers and baby boomers preferred straight penises or believed there was no ideal penis shape, which is very body positive.

Unlike other places around the globe, the United States has a proportionately larger prevalence of circumcised males. As of 2021, the U.S. national circumcision rate was around 71%, compared to less than 20% for most European countries. Around 4 in 5 Gen Zers believed that the ideal penis should be circumcised, compared to roughly 70% of millennials and 60% of Gen Xers and baby boomers.

According to our survey results, an “ideal” penis curves up like a banana, is circumcised, and has some girth. However, penises come in all shapes and sizes. Being body positive about one’s own penis boosts confidence and sexual performance, leading to a more satisfying sexual experience for everyone involved. Criticism of a partner’s penis can create insecurity and shame, leading to sexual dissatisfaction or performance anxiety. So, keep in mind the golden rule and treat others how you’d like to be treated yourself.

This study uses data from a survey of 1,003 Americans located in the U.S. Survey respondents were gathered through the Amazon Mechanical Turk survey platform where they were presented with a series of questions, including attention-check and disqualification questions.

Please note that survey responses are self-reported and are subject to issues such as exaggeration, recency bias, and telescoping.

A version of this article originally appeared here on medzino.com

A Beginner's Guide To The Kama Sutra, From Indian Sexuality Experts

Kim Got Real About Pete’s Habit Of Dating “Hot Girls”

3 Love Language Pairings That Work Well Together For Love Relationships