New Delhi, India (CNN)Ananya was 15 when she watched her older sister marry a man she barely knew.Her sister was 19 years old at the time, and had only met her new husband once before, a few months earlier. They’d talked a handful of times on the phone.”My oldest sister’s marriage was traditional. I don’t think she was prepared and she didn’t seem to be that happy bride … I think 19 is too young to get married,” says Ananya, who requested to use an alias to discuss personal family matters.Ananya’s parents chose her sister’s husband, as well as partners for her two other sisters, who got married when they were 22 and 26 years old. Now aged 30, Ananya knows that her family would love her to settle down with a spouse. She’s not so sure. Either way, she says she will have more control over her future than her sister.Arranged marriages are still the norm in India, but there’s a growing trend for some women to choose their own partners — or to not marry at all. Technology is also replacing traditional methods of matchmaking. Instead of relying on family connections, many young Indians and their parents are turning to online marriage sites to find a partner.While the methodology may be modernizing, many young Indians still say the old measures of compatibility — such as caste and complexion — are discriminatory and need to go. 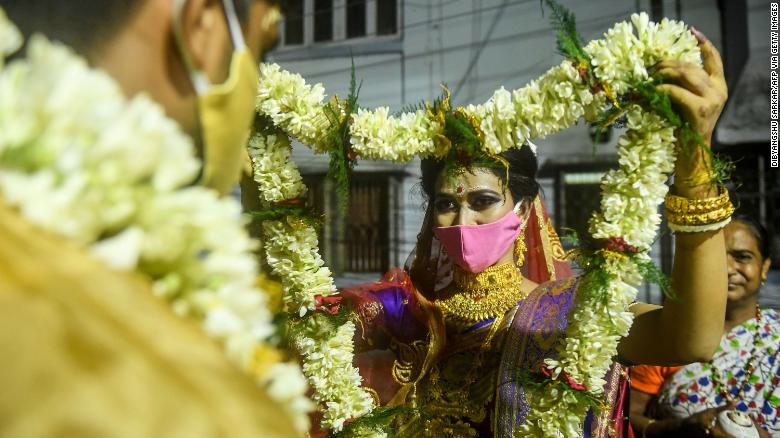 A bride exchanges flower garlands with a groom as part of their traditional marriage ceremony in Kolkata in July, 2020.

Arranged marriages date back centuries as a way for upper caste families to maintain their status and consolidate assets. Over time, the system spread to other communities for similar reasons.Traditionally, families would write up a resume of their children’s vital statistics — weight, height, complexion and caste — and share the list with the parents of prospective partners. Lists can also be shared with family friends, a local priest or even a paid matchmaker of the kind featured in Netflix’s hit show “Indian Matchmaker,” although that is increasingly rare.

You’re made to feel like cattle. You’re dehumanized to such an extent and I don’t think the families even realize this.

In the past, such information may have been confined to that inner circle, but now it’s often also on the internet for the world to see. Matrimonial sites function in a similar way to dating sites, encouraging users to post their personal information to find a match. But while dating site bios are typically fun and witty, the information shared on a marriage site is much more personal. Occupation, income, religion and caste are all listed. For women, the post might also specify their weight, body type and complexion. Many families see such data as crucial for a successful match, but more liberal Indians view some criteria– particularly caste and complexion — as discriminatory.”You’re made to feel like cattle. You’re dehumanized to such an extent and I don’t think the families even realize this,” said Mira, a 26-year-old lawyer who lives in New Delhi. She requested to use a pseudonym to avoid offending her family. “When you are reduced to a set of qualities on a piece of paper, and I’m sure this holds true for men as well, it’s profoundly objectifying and that’s what puts me off the whole thing, “she said.

If a match is made — either through a marriage site or word of mouth — the prospective couple often then have a handful of “dates,” usually chaperoned by family members. The couple is then expected to make a decision on whether to marry. While there are similarities with dating in the West, these marriages are not considered “love marriages,” the union of two people who have fallen for each other. But these modern arranged marriages give the individuals involved more power than they might have had in the past.

Every year or so, they do ask when I want to take the decision to get married. It’s in a concerned way, but casual.

For instance, when Ananya was 25 she was asked to compile her own biodata — years ago, her family might have done it for her. “I remember it was like making a CV and I sent it to my dad who forwarded it,” she said.Ananya was already living a relatively modern life. She had moved away from her home city of Jaipur in Rajasthan state to the Indian capital, New Delhi, where she works for an arts events management company.After the information was exchanged, a family from a city near Jaipur approached her father about the possibility of marriage, but with the condition that their daughter-in-law would either stay at home or join the family business.”I found this strange because I was very clear about being independent. He said no to them — but only told me later,” she said.Ananya said her success outside the family home had helped to convince her father that there was no need for her to rush into marriage.”He’s seen that I manage my own life and I work,” she said. “Every year or so, they do ask when I want to take the decision to get married. It’s in a concerned way, but casual — not that you have to do this.” 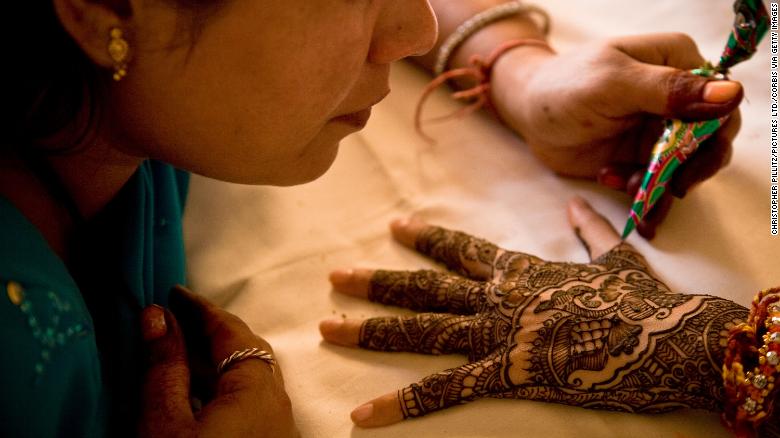 An artist applies henna to the hands of a young Indian bride.

In the past, parents made most of the decision-making around their children’s nuptials. Couples were told who they were to marry and the event was celebrated at a typically big Indian wedding.

We met, our families met. We clicked and decided to go ahead with it. On the same day, both sides said yes.

“Today, the parties seeking to get married have substantial say in whether to say yes or no to one or more proposals,” said Amitrajeet A. Batabyal, the Arthur J. Gosnell Professor of Economics at the Rochester Institute of Technology.Sanjay Chugh, a psychiatrist and therapist in New Delhi, who has worked with couples for 35 years, said young Indians are taking advantage of the arranged marriage system to meet people — and they’re spending more time getting to know each other before exchanging vows.”Arranged marriages are a system here and it’s not going away in a hurry,” said Chugh. “The difference now is that it serves as an introduction to a prospective bride or groom and people meet five or six times. Usually the chances when you’ve met that many times, you’re going to go ahead with it.”Pallavi — not her real name — said this modern approach to an arranged marriage worked well for her. She spent six months getting to know her husband, who was introduced by a family friend.”We met, our families met. We clicked and decided to go ahead with it. On the same day, both sides said yes,” Pallavi said.She wasn’t under any pressure to get married and could have broken off the engagement at any time.”My parents were very relaxed. It was up to me to get married or not,” she said. 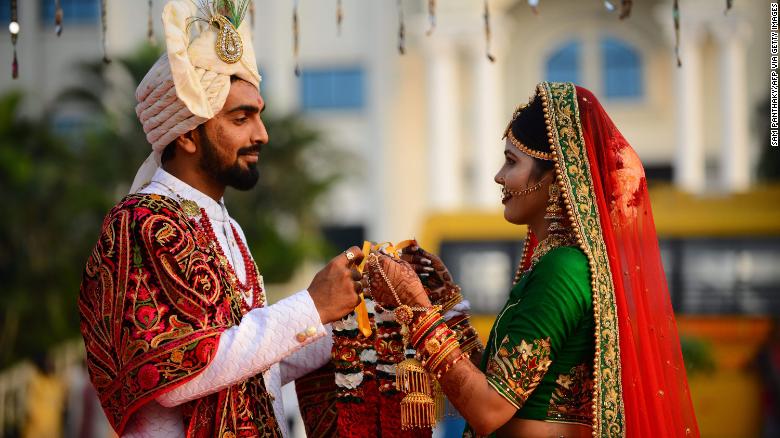 A bride and a groom pose for a photograph ahead of a mass wedding ceremony in Surat in December, 2019.

The evolution of arranged marriages

In a country as vast and diverse as India, experiences of finding love range from the staunchly traditional to modern romance. But broad trends are emerging that suggest times are changing.In the past 30 years, the average age for a woman to marry has risen from 19.3 years in 1990 to 22.3 years in 2018. There are differences based on where women live. For example, in rural regions the average age of marriage was 21.8 years in 2019, but 23.4 years in urban areas, according to a government survey.Women’s participation in the labor force also fell over roughly the same period — between 1993-94, the labor force participation rate of urban women aged from 15 to 19 was 142 per 1,000, according to government data. Less than a decade later, that figure had dropped to 89 per 1,000.There are different theories for that, including a weaker job market. But one of the reasons is that more Indian women are staying in education for longer. Some are then going onto university and gaining degrees, which gives them more options beyond getting married. 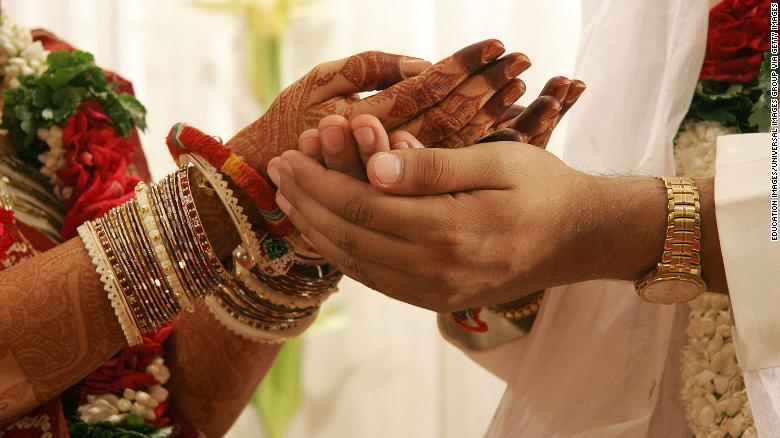 Young Indian couples are now meeting online and spending more time getting to know each other before getting married.”There’s been a natural progression, and finances and money give someone more confidence. Women have more control of their own lives,” according to Nisha Khanna, a New Delhi-based psychologist and marriage counselor.”The patriarchal structure of society is slowly changing. Women are becoming more assertive, whether it’s in terms of needs of physical intimacy or financial matters. They’re becoming more outspoken, they’re becoming more equal,” she said.

Mira, the young New Delhi lawyer, is not sure if she’ll ever marry.

Of course, you can’t be 30 and unmarried. It’s like the sky will fall or something.

She says her perspective on marriage — and life more broadly — changed when she left home for the city, where she met people from different backgrounds and castes.Mira’s family is from Amritsar, a small city in the northern state of Punjab. They hold the traditional view that young women should settle down and start a family.”I was reared to be a wife, there’s no two ways about it. Even small things like running the house or making sure things are in order, those things are ingrained in me,” Mira said.She said she was brought up to want to get married, but is now “unlearning” that expectation.”Every year, I push it forward is just rebellion,” Mira said. “Because I’m 26, I’m at this dangerous age where my family really want to see me get married in the next two years because, of course, you can’t be 30 and unmarried. It’s like the sky will fall or something.””Who knows? Maybe at 30, I will feel lonely and my friends will have partners, houses and kids, maybe it will get to me then, but I hope the process of unlearning pays off.

Bizarre ‘sea penis’ worm gets a rise out of social media