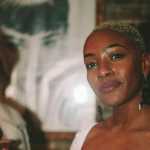 “Loving a Black woman feels like a privilege; it feels like I’m seen,” Kiesh says softly to Crystal as she stares into her lap. This video of two Black women talking about Black Love for Refinery 29’s Unbothered platform has been shared over 70,000 times on Twitter and ‘liked’ more than double that amount. The five-minute interview regularly resurfaces on the timeline, and when it does, I can’t help but watch it.

Research conducted by match-making app Bumble found that 67% of Black British women do not see themselves represented in images of Black Love. Hearing this, it’s understandable why people have such an emotive reaction to this video. When do Black people—particularly Black women—get the chance to truly be vulnerable and soft? To be Black in 2020 is to be in a constant state of fatigue. The backlash to the most recent BLM protests was a reminder that Black lives still do not matter. The constant trauma of seeing Black people hunted and killed by police and emboldened racists viciously stripped away at our humanity. Though Black History Month traditionally focuses on filling the forgotten moments of time, this year provided the opportunity for it to serve as an intentional space to celebrate Blackness.

Bumble’s Black History Month campaign was a breath of fresh air and countered the narrative that resistance equals anguish; resistance is also joy. The digital campaign saw thirty-one stories of Black Love as told by huge stars like Jourdan Dunn, Ms Banks and Clara Amfo. The campaign followed research that found more than one in three Black British millennials feel that seeing representations of Black Love would make them feel empowered and celebrated.

“We’ve got to be committed, whether or not we feel like we’re getting what we need.”—George The Poet

George Mpanga, known by his stage name George The Poet, is a British-Ugandan spoken-word artist and award-winning podcast host. The London native was featured in the viral campaign, speaking airly about his childhood sweetheart. His words inspired hope, so we sat down to chat with The Poet about what Black Love means to him. “I knew I was in love because I wanted to be responsible for my partner,” he tells me wistfully over a Zoom call. “I wanted to be accountable to her and I wanted to make all my decisions with her. That’s a feeling that I’d never had before. In this relationship, everything came together—she’s everything that I needed.”

George is happily in love, and although he was never searching for it, he has some words for those still looking: “Have faith that, somewhere along your path, your journey is going to intersect with someone else who is ready to move in the direction that you’re moving in. And that’s the goal. But remember: you are moving and growing.” We are an over-exposed and impatient generation, and the social media era hasn’t done much to aid our dating lives other than adding additional layers of projection and miscommunication. George thinks that “there will always be differences in how generations experience love. Many of us haven’t experienced raising children up to adulthood or really falling in love and fighting for marriage through hard times, so what we end up doing on Black Twitter is going off ego.”

The political nature of Black identity also seeps into our conversations and understanding of one another. “I think there are deep-rooted insecurities across our whole community,” he says. “When we are existing in a predominantly white country, where our history’s not really recognised, there is a lot of insecurity and that insecurity comes out in a lot of those Black Twitter conversations.” For many, these insecurities leave people stuck in a cycle of situationships that are emblematic of dating in 2020. “If you find yourself in a situation where you kind of like someone but you’re not really sure what it is, you’re well within your rights to communicate that with that person,” he adds. “It always comes down to respect. The least that we can do is ensure no one’s getting mugged off.”

For George, Black Love here in the UK is political and requires understanding. “People like us who don’t live on the continent that our parents are from can just end up drifting,” he tells me. “It feels like we don’t really belong, but we belong to each other so we should really try and hold on to that and protect it.” Though love is beautiful, it is by no means easy. “Love is a verb,” George adds. “It is something that you commit to, and you do it even when you don’t feel like it, even when you feel like you’re not getting what you expected from it. As Black people, we definitely have to have that view of ourselves, of the Black community, and of each other. We’ve got to be committed, whether or not we feel like we’re getting what we need.”

How to Survive Heartbreak (when you have no job, no money and no one)

What Is The Purpose Of Marriage? 3 Vital Elements of Marriage Today

Are You the Toxic Person in Your Relationship?